Command and Communication Frictions in the Gettysburg Campaign (Paperback) 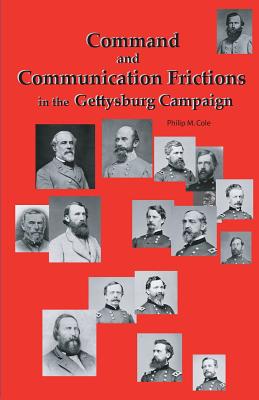 Command and Communication Frictions in the Gettysburg Campaign (Paperback)


Often on our shelves, but if we're out, we can usually restock quickly
Frictions are the mechanisms which complicated warfare. They are the constant streams of obstacles thrown in the way of planning and the governor of progress. Armies encountered any number of unpredictable obstacles in any number of situations. Each friction requires a different solution. Each challenge is a diversion from the planned objective. Each unplanned task saps an army's resources needed elsewhere. Frictions steered the armies into making major decisions and altering or reversing plans. They drew commanders' attention to less important details in operations at the expense of maintaining balance over the big picture. This work focuses on the frictions of two important functions - command and communication. Command frictions in the Army of the Potomac, for example, caused a great deal of confusion in recognizing who was in charge at any one time or place. Communication frictions altered Lee's original plan to move towards Harrisburg, Pennsylvania and diverted the Army of Northern Virginia to Gettysburg; they caused forward elements of the Confederate army to provoke a general engagement against Lee's instructions; they misdirected thousands of troops away from the battle and caused unnecessary casualties. "Command and Communication Frictions in the Gettysburg Campaign" illustrates the effect these two functions had in determining the outcome of the campaign. This work uses a variety of incidents, some familiar, to illustrate their serious impact on the battle - at least as much as troops in combat affected the result. The examples presented deal mainly with the high commands of the armies, especially the Army of the Potomac. The high command level was where the most important decisions were made to influence the progress of the army and the destiny its troops. Even though this study concentrates on frictions in the Gettysburg campaign, the revelations from this one operation, nevertheless, can be applied to any battle of any war. Philip M. Cole's book Command and Communication Frictions in the Gettysburg Campaign brings about an interesting scholarship to the battle and campaign which has been so written about over and over again. But with grace, he has brought a new look into that which has been studied so prominently with fresh air... Cole's study on the command and communication frictions is more than just another Gettysburg study; it is a look into the structure and reason for some of the major problems in the battle when it comes to command... One of the most interesting new points which Cole brings out is that Hooker did not just "make time" as Coddington states in his work; he had many communication frictions between himself and the high command in Washington. Another problem with communication he brings about is the use of time on the battlefield and just how much time it takes to send orders around on the field. Part of the command friction which was most interesting was the friction with senior commanders and wing commanders. Sometimes with complete disregard for orders, there were great issues among the men in the army. One thing which should have been obvious, but seems new in this work, is the personal relationships which are created through experience and can be a problem when the command changes. These studies are some of the reasons that this book should be among the library of any Gettysburg enthusiast... Cole's work is one of the best studies presented on command in quite some time and though it has been in print for about eight years, should be part of any study of Gettysburg by Civil War historians. This book is highly recommended for any interested in command structure or issues during the Gettysburg Campaign. 5 Star Review by Matthew Bartlett posted on goodreads.com December, 2013.