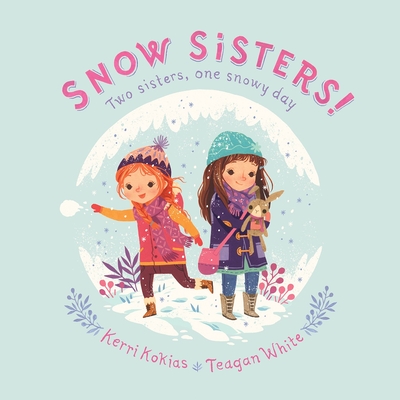 
Often on our shelves, but if we're out, we can usually restock quickly
Just like snowflakes, no two sisters are alike, but together, they can share the perfect snow day. Siblings, snow-bunnies, and fans of the Frozen movies will all find something to love in Snow Sisters!

When snowflakes fall, two sisters react in different ways. One is excited and the other is wary. The first sister spends the morning outdoors, playing until she's all tuckered out. Meanwhile, the second sister stays indoors, becoming ever more curious about the drifts outside. Soon, they switch places, and spend the second half of the day retracing each other's footsteps. But each sister puts her own unique spin on activities like sledding, baking and building.
The simple mirrored text is spare and lovely, and each spread is split to show what each sister is doing independently--until at last they come together in the sweet, satisfying conclusion. LeUyen Pham's Big Sister, Little Sister meets Kate Messner's Over and Under the Snow.

"Chock-full of ideas for fun on a snowy day . . . A nice addition to sibling shelves that shows that fun can also be had apart." --Kirkus Reviews
KERRI KOKIAS credits most of her story ideas to her "fly on the wall" personality. This means she's both a keen observer of social interactions and a nosey eavesdropper. Snow Sisters is her first picture book. She lives in Seattle with her family.

TEAGAN WHITE is a freelance illustrator specializing in playful watercolors and illustrated typography. Originally from Chicago, Teagan now lives and works in Minneapolis, where she received a BFA in illustration from the Minneapolis College of Art & Design in 2012. She has written and illustrated a variety of picture books including Adventures with Barefoot Critters and Amy Krouse Rosenthal's That's Me Loving You.

Visit her at tinymothstudios.com
"Captivating and even surprising. . . . It’s a neatly conceived study of two independent sisters who are fully capable of enjoying a day on their own terms." —Publishers Weekly

"Chock-full of ideas for fun on a snowy day . . . A nice addition to sibling shelves that shows that fun can also be had apart." —Kirkus Reviews