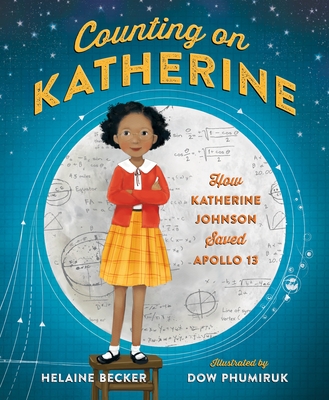 The bold story of Katherine Johnson, an African-American mathematician who worked for NASA during the space race and was depicted in the film Hidden Figures.

You've likely heard of the historic Apollo 13 moon landing. But do you know about the mathematical genius who made sure that Apollo 13 returned safely home?

As a child, Katherine Johnson loved to count. She counted the steps on the road, the number of dishes and spoons she washed in the kitchen sink, everything! Boundless, curious, and excited by calculations, young Katherine longed to know as much as she could about math, about the universe.

From Katherine's early beginnings as a gifted student to her heroic accomplishments as a prominent mathematician at NASA, Counting on Katherine is the story of a groundbreaking American woman who not only calculated the course of moon landings but, in turn, saved lives and made enormous contributions to history.

Her books include Counting on Katherine: How Katherine Johnson Saved Apollo 13, Stress Less: Tips and Tools to Help You Chill, and Sloth at the Zoom.

Dow Phumiruk is the award-winning illustrator of Counting on Katherine: How Katherine Johnson Saved Apollo13, which won the Bank Street Cook Prize and was named an NSTA Outstanding Science Trade Book as well as an NCTM Mathical Honor Book, among many other honors; An Equal Shot: How the Law Title IX Changed America; and Maya Lin: Artist-Architect of Light and Lines, which was an Amazon Best Book of the Year and an NCSS Notable Social Studies Trade Book for Young People. A general pediatrician with a passion for art, Dow lives in Colorado with her family.

"A picture-book biography of a humble genius who excelled in a career once out of reach for most African-Americans. An excellent biography that will inspire young readers, especially girls, to do what they love."--Kirkus, starred review

"Children who want to share in the Hidden Figures buzz can start right here . . . Phumiruk’s digital artwork convincingly portrays Johnson as brainy and imaginative. This title is ready made for “My Hero” biography reports."--The Bulletin

"Featuring engaging text and captivating illustrations, this picture book introduces the amazing life of mathematician Katherine Johnson to young readers. Sure to inspire a new generation of mathematicians. A solid addition to biography collections."--School Library Journal