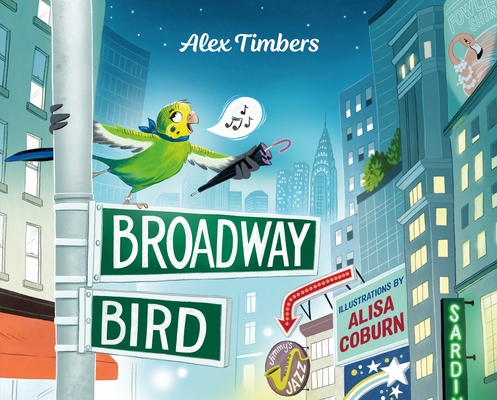 A charming and heartfelt picture book about a little bird who dreams of making it big on Broadway, from Tony Award-winning Broadway director Alex Timbers.

Louisa is a tiny parakeet with a HUGE dream: to be a Broadway star. But no matter what she does, everyone keeps telling her she's too small to make it big! When a chance at her big break comes, Louisa learns that no matter how small you are, with a little talent and a lot of hard work, you can do anything - even be on Broadway!

With colorful, charming illustrations by artist Alisa Coburn, this heartfelt picture book from renowned Broadway director Alex Timbers is about persistence, believing in yourself, and, of course, the magic of Broadway.

Alex Timbers is a Tony Award-winning writer and director and the recipient of Golden Globe, Drama Desk, Drama League, and Outer Critics Circle Awards, as well as two OBIE and Lucille Lortel Awards. His many Broadway credits include Moulin Rouge!, Beetlejuice, David Byrne’s American Utopia, The Pee-wee Herman Show, Nick Kroll and John Mulaney’s Oh Hello on Broadway, Bloody Bloody Andrew Jackson, and Disney’s Peter and the Starcatcher. For television, he co-created Amazon’s Mozart in the Jungle and has directed numerous concert specials, including the Emmy-winning John Mulaney: Kid Gorgeous at Radio City for Netflix. Alex lives in Times Square with his partner Rebekah and three mischievous parakeets.

Alisa Coburn is the illustrator of more than a dozen books for children including Hello Door and the Billie's Adventures series. Before coming to children’s books, she worked in advertising, broadcasting, and animation. She now lives in the picturesque English countryside finding fresh ways to weave narrative and design together.

"This book reminds me that Broadway is a magical place. To believe in yourself takes a lot of courage, and Louisa's journey shows us that being yourself and hard work will take you places you never thought you could go." —Phillipa Soo

"Every moment of this book is a true delight . . .this book and its message are truly for anyone and everyone. It's no wonder Alex Timbers is one of Theatre's most endeared directors: the genuine passion, specificity, and love for the craft and community that fuels the heartbeat of Broadway is explained so beautifully through the journey of this sweet little (but big) parakeet." —Ashley Park

“Delightfully captures both the rewards and challenges of working on Broadway—it’s a jungle out there!” —Audra McDonald

"With an abundance of loving spoofery. . .and playful cartoon art that makes 42nd Street look like the happiest place on Earth, Timbers and Coburn create a punny love letter to the Great White Way for Broadway babies of any age." —Publishers Weekly