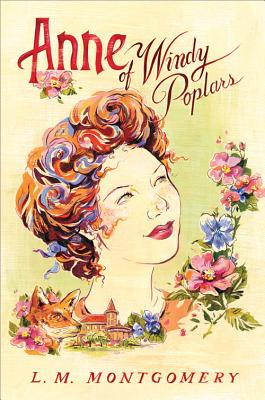 This is book number 4 in the Official Anne of Green Gables series.

A classic for all ages, this official, unabridged edition of Anne of Windy Poplars features the unforgettable character of Anne Shirley and special memories, exclusively from L.M. Montgomery's granddaughter.

Anne Shirley has a tendency to stir up controversy wherever she goes. And her new position as principal of Summerside High School is no exception. The Pringles, the ruling family in town, want one of their own in the job, and they've made it their mission to drive Annie out.

As Anne settles into her tower room at Windy Poplars with the widows Aunt Kate and Aunt Chatty, she finds she has more allies than she knows. And letters from her dear Gilbert Blythe help her remember that with a little bit of imagination, she can triumph over anything...

Through Anne's eyes, the ordinary world becomes magical and every day is an adventure. It's no surprise she is a favorite of everyone from Mark Twain to Duchess Kate.

L.M. Montgomery achieved international fame in her lifetime that endures well over a century later. A prolific writer, she published some 500 short stories and poems and twenty novels. Most recognized for Anne of Green Gables, her work has been hailed by Mark Twain, Margaret Atwood, Madeleine L’Engle and Princess Kate, to name a few. Today, Montgomery's novels, journals, letters, short stories, and poems are read and studied by general readers and scholars from around the world. Her writing appeals to people who love beauty and to those who struggle against oppression.