Why Fantasy Football Matters: (And Our Lives Do Not) (Paperback) 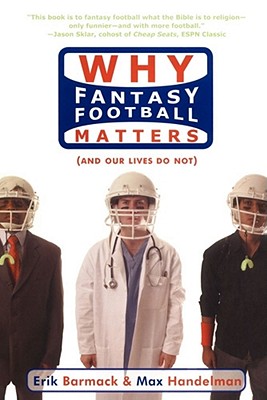 Why Fantasy Football Matters: (And Our Lives Do Not) (Paperback)


Often on our shelves, but if we're out, we can usually restock quickly
Talking Trash, Trading Studs, and Drafting Sleepers -- an Insider's Guide to the World's Greatest Obsession

U.S. businesses lose $200 million in productivity each football season because employees are managing their fantasy squads instead of working.

In Why Fantasy Football Matters (And Our Lives Do Not), two grizzled veterans revel in the addiction that is fantasy football. From pre-draft hijinx to post-draft trash talk, from tumultuous trades to the perils of free agency, it celebrates the eccentric personalities, absurd rituals, and hilarious superstitions of one of the most fanatical fantasy leagues on earth.

With humor, insight, and a dash of advice, Why Fantasy Football Matters celebrates the thirty-two million Americans who prefer managing their fantasy squads to relaxing with loved ones. And it gives girlfriends, coworkers, and sports purists all the proof they need to accept that this is an obsession that really matters.
Erik Barmack is a director of business development at ESPN and is the former vice president of fantasy games at the Sporting News. He has written for the Sporting News, the Sports Business Journal, the Atlantic Online, and others.

He and Max Handelman have won three Bush League Championships, and bickered endlessly while losing the other five.

He and Erik Barmack have won three Bush League Championships, and bickered endlessly while losing the other five.
"This book is to fantasy football what the Bible is to religion -- only funnier -- and with more football." -- Jason Sklar, cohost of Cheap Seats, ESPN Classic

"This is the biography of every fantasy league out there -- the camaraderie, smack talking, and competition that drives us all. The only thing more entertaining than reading about how normally responsible, mature professional people turn into obsessed lunatics is when you realize most of the writing is really about you." -- David Dorey, TheHuddle.com

"The passion, brotherhood, and insanity of fantasy football are here in all their glory. The perfect read for fantasy football enthusiasts . . . or those who want to understand them." -- Brendan Roberts, Sporting News