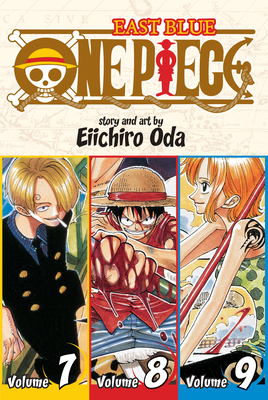 This is book number 3 in the One Piece (Omnibus Edition) series.

Join Monkey D. Luffy and his swashbuckling crew in their search for the ultimate treasure, the One Piece.

As a child, Monkey D. Luffy dreamed of becoming King of the Pirates. But his life changed when he accidentally ate the Gum-Gum Fruit, an enchanted Devil Fruit that gave him the ability to stretch like rubber. Its only drawback? He’ll never be able to swim again—a serious handicap for an aspiring sea dog! Years later, Luffy sets off on his quest to find the “One Piece,” said to be the greatest treasure in the world…

The Straw Hat crew makes a pit stop at the oceangoing restaurant the Baratie, where the cooks are as rough-and-tumble as the pirates who frequent it. Don Krieg, a notorious pirate whose ship was battered in the treacherous seas of the Grand Line, has set his sights on the Baratie, but sous-chef Sanji isn't going to stand idly by while these ruthless pirates take the ship by force!
Eiichiro Oda began his manga career at the age of 17, when his one-shot cowboy manga Wanted! won second place in the coveted Tezuka manga awards. Oda went on to work as an assistant to some of the biggest manga artists in the industry, including Nobuhiro Watsuki, before winning the Hop Step Award for new artists. His pirate adventure One Piece, which debuted in Weekly Shonen Jump magazine in 1997, quickly became one of the most popular manga in Japan.