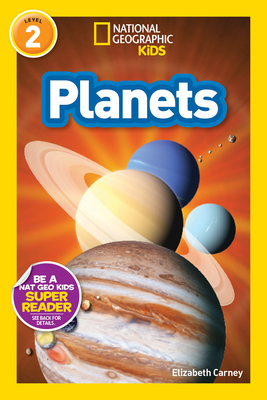 By Elizabeth Carney
List Price: $4.99
Our Price: $4.49
(Save: $0.50 10%)
Often on our shelves, but if we're out, we can usually restock quickly
This brilliantly illustrated book taps into children's natural curiosity about the vast world of space. This level 2 reader, written in simple language that is easy for young readers to understand, introduces children to our solar system, including all of the planets and dwarf planets, and lots of fascinating fun facts. This reader helps cultivate the explorers of tomorrow!

This high-interest, educationally vetted series of beginning readers features the magnificent images of National Geographic, accompanied by texts written by experienced, skilled children's book authors. The inside back cover of the paperback edition is an interactive feature based upon the book. Level 1 books reinforce the content of the book with a kinesthetic learning activity. In Level 2 books readers complete a Cloze letter, or fun fill-in, with vocabulary words.

ELIZABETH CARNEY is a writer and editor based in Brooklyn, New York. She specializes in nonfiction children's books and science, math, and STEM-related magazines. Her author credits includeEverything Big Cats, Everything Dolphins, Great Migrations: Whales, Wildebeests, Butterflies, Elephants, and Other Amazing Animals on the Move, and several titles in the Face to Face and National Geographic Readers series.

Elizabeth Carney received the 2005 AAAS Science Journalism Award for science reporting for children. Her titles Face to Face With Cheetahs, Face to Face With Gorillas, and Great Migrations: Whales, Wildebeests, Butterflies, Elephants, and Other Amazing Animals on the Move appeared on the National Science Teachers Association's Outstanding Science Trade Book list for 2008, 2009, and 2010 respectively.