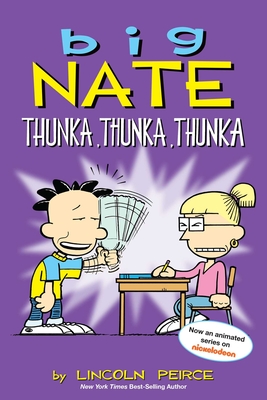 This is book number 14 in the Big Nate series.

Now an animated series with Paramount+ and Nickelodeon!

There's never a dull moment with Nate Wright in the picture. Whether getting caught playing table football in the library or raiding the teachers' lounge, Nate's antics are always hilarious and detention worthy!

Sixth grade can be a tension convention for Nate Wright. His baseball team’s just been given the lamest name in Little League history; he’s on the verge of becoming know-it-all Gina’s personal servant for a day; and Spitsy, the closest thing he has to a dog of his own, is in love with a CAT. Yup, Nate’s up to his ears in stress.

Luckily, the perfect remedy is close at hand: an empty plastic soda bottle. All Nate has to do is drum it gently against his head—thunka, thunka, thunka—and the pressures of dealing with Coach John, Mrs. Godfrey, and the terrifying Kim Cressly begin to fade away. Who knew an empty bottle could be so therapeutic? There’s only one stress-buster that’s better: reading Big Nate comics! So sit back, relax, and enjoy this latest collection, Thunka, Thunka, Thunka.
Lincoln Peirce has been drawing the Big Nate comic strip for more than 20 years. Born in Ames, Iowa, Peirce grew up in Durham, New Hampshire. As a kid, he began creating his own strips in the sixth grade. Peirce taught high school in New York City and has created several animated pilots for Cartoon Network and Nickelodeon. He lives in Portland, Maine, with his family.