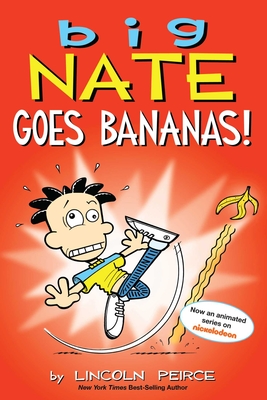 This is book number 19 in the Big Nate series.

Now an animated series with Paramount+ and Nickelodeon!
Join Big Nate and his pals for another round of pranks, jokes, and wedgies in this installment of the New York TImes bestselling series!

Turns out Nate has a problem with fruit that’s past its prime. And that’s not all that’s bugging him. Kim Cressly is making Chester jealous at Nate’s expense, Artur is challenging him in the Hunny Bursts mascot contest, and his replacement social studies teacher is none other than Coach John. In banana terms, it’s all left Nate feeling a little bruised. Can he make it to summer without slipping up?

Join Nate and the gang for more shenanigans in this collection of Big Nate comics!

Lincoln Peirce has been drawing the Big Nate comic strip for more than 20 years. Born in Ames, Iowa, Peirce grew up in Durham, New Hampshire. As a kid, he began creating his own strips in the sixth grade. Peirce taught high school in New York City and has created several animated pilots for Cartoon Network and Nickelodeon. He lives in Portland, Maine, with his family.