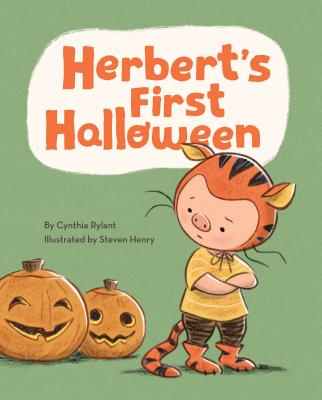 
Often on our shelves, but if we're out, we can usually restock quickly
Herbert is deeply doubtful about his first Halloween—but with a little help from his dad and a special tiger costume, Herbert might just find confidence on Halloween night. Together, father and son practice roaring, carve a pumpkin, and venture out in search of candy. And by the end of the night, Herbert finds his doubts have melted away. A sweet introduction to Halloween and to being brave, this book is sure to delight the youngest of trick-or-treaters.
Cynthia Rylant has written more than 100 children's books in English and Spanish. Her novel Missing May won the Newbery Medal, and A Fine White Dust was a Newbery Honor book. She lives in Lake Oswego, Oregon.

Steven Henry is the illustrator of the Ella the Elephant book series (as Steven D'Amico). His work has also appeared on PBS Kids, Nick Jr., and the Disney Channel. He lives in Seattle, Washington.
"Highlights the comfortable bond between parent and child."-Publishers Weekly

"This winning introduction to Halloween meets young children where they are. sure to become a dog-eared favorite."-School Library Journal, starred review