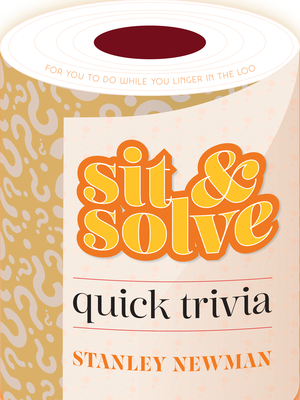 By Stanley Newman
List Price: $7.99
Our Price: $7.19
(Save: $0.80 10%)
Often on our shelves, but if we're out, we can usually restock quickly
There's always time for a little bit of trivia
Any time you have a few minutes on your hands--wherever that may be--pick up this book and test yourself with multiple-choice trivia questions on a wide variety of topics from a true trivia maven.
SAMPLE IN. Stanley Newman, crossword editor for the Long Island newspaper Newsday, is syndicated worldwide to more than 200 daily, Sunday, and Internet newspapers. His puzzles have appeared regularly in Prevention, People, Sport, and Businessweek magazines. Newman is the author or editor of more than 200 books and has organized and conducted many puzzle and trivia events in the United States, including four seminars at the Smithsonian Institution and, in 2007, the first crossword tournament ever held at Yale University. He lives in New York with his wife and has three grown children.