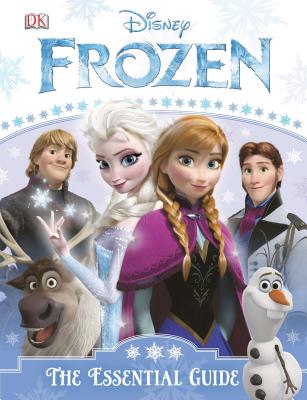 By DK Publishing
List Price: $12.99
Our Price: $11.69
(Save: $1.30 10%)
From the studio behind 2010's Tangled and this year's Wreck-It Ralph, Walt Disney Animation Studios presents Frozen, the coolest comedy-adventure ever to hit the big screen. When a prophecy traps a kingdom in eternal winter, Anna, a fearless optimist, teams up with extreme mountain man Kristoff and his sidekick reindeer, Sven, on an epic journey to find Anna's sister, the Snow Queen Elsa, and put an end to her icy spell. Encountering mystical trolls, a funny snowman named Olaf, Everest-like extremes, and magic at every turn, Anna and Kristoff battle the elements in a race to save the kingdom from destruction.

DK Publishing was founded in London in 1974 and is now the world's leading illustrated reference publisher and part of Penguin Random House, formed on July 1, 2013. DK publishes highly visual, photographic nonfiction for adults and children, and produces content for consumers in more than 87 countries and 62 languages, with offices in Delhi, London, Melbourne, Munich, New York, and Toronto. DK's aim is to inform, enrich, and entertain readers of all ages, and everything DK publishes, whether print or digital, embodies the unique DK design approach. DK brings unrivaled clarity to a wide range of topics with a unique combination of words and pictures, put together to spectacular effect. It has a reputation for innovation in design for both print and digital products. DK's adult range spans travel—including the award-winning DK Eyewitness Travel Guides—history, science, nature, sport, gardening, cookery, and parenting. DK's extensive children's list showcases a fantastic store of information for children, toddlers, and babies. DK covers everything from animals and the human body, to homework help and craft activities, together with an impressive list of licensing titles, including the bestselling LEGObooks. DK acts as the parent company for Alpha Books, publisher of the Idiot's Guides series and Prima Games, video gaming publishers, as well as the award-winning travel publisher Rough Guides.