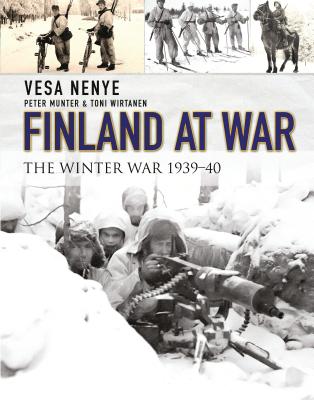 The story of the "Winter War" between Finland and Soviet Russia is a dramatic David versus Goliath encounter. When close to half a million Soviet troops poured into Finland in 1939 it was expected that Finnish defenses would collapse in a matter of weeks. But they held firm. The Finns not only survived the initial attacks but succeeded in inflicting devastating casualties before superior Russian numbers eventually forced a peace settlement. This is a rigorously detailed and utterly compelling guide to Finland's vital, but almost forgotten role in the cataclysmic World War II. It reveals the untold story of iron determination, unparalleled skill and utter mastery of winter warfare that characterized Finland's fight for survival on the hellish Eastern Front.

Now publishing in paperback, Finland at War: the Winter War 1939–40 is the premiere English-language history of the fighting performance of the Finns, drawing on first-hand accounts and rare photographs to explain just how they were able to perform military feats that nearly defy belief.

Vesa Nenye followed his family's illustrious military tradition and served his country, Finland, as a Tank Commander and an Arms & Munitions NCO. Upon leaving the armed forces, he became a member of the Panssarikilta--the armored core heritage society in Finland. He lives in the UK.

Peter Munter is a veteran of historical and strategy gaming in Finland, and founded a play-by-mail business in the times before internet. He worked extensively as a writer and translator of roleplaying supplements in the late 80s. Peter is an ex-Marine from the Finnish Navy and currently works as a Managing Director in a games retail chain that he established with Vesa Nenye in 1997. He lives in Finland.

Toni Wirtanen served in the Kymi Jäger Battalion of the Karelian Brigade, as an infantry anti-tank specialist. He was discharged with honors as a lance corporal, and has ever since been active with the reservist corps. Toni is best known for his work as the singer and songwriter in the rock band Apulanta, founded in 1991.

Chris Birks moved from England to Bergen, Norway, at the age of 13. He went on to study geology at the University of Bergen. While studying, he developed an interest in military history and was instrumental in the development of the hobby scene for strategy wargaming in Norway. Chris now works as a teacher of mathematics and natural sciences, and splits his free time between family trips to the mountains, wargaming and different historical research projects.

"This book I found to be the most complete and detailed account of the David vs Goliath battle between Stalin's Russian forces and the small Finish Armed forces." - IPMS / USA