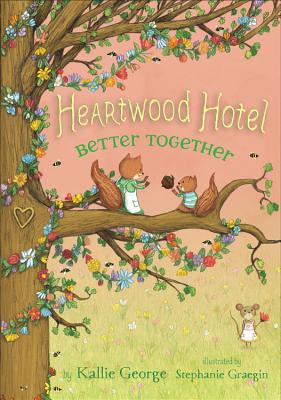 This is book number 3 in the Heartwood Hotel series.

Spring has sprung and the animal staff of the Heartwood Hotel gear up for another busy season in the next installment of this adorable illustrated chapter book series.

Spring has come to Fernwood Forest, and the Heartwood Hotel is all a-bustle. With Mr. Heartwood off on vacation, it’s up to Mona and the rest of the staff to keep everything running smoothly. When rumors buzz of a rival hotel, Gilles is determined to prove that the Heartwood is the very best with the splashiest Spring Splash the forest has ever seen. Guests check in from near and far to compete for the Cutest Egg, the Tiniest Talent, and the Best Blossom. Newcomer Henry is all too happy to help out, making Mona start to feel unsure of her place. Does the Heartwood really need her as much as she thought? But soon there’s more to worry about than whose egg has the sweetest speckles. Some decidedly uninvited guests have been drawn to the festivities. Can Mona find a way to bring everyone together in time to save them all from danger?

Readers will cheer for these kind, brave, beloved characters as they embark on their next adventure in the third book of the charmingly illustrated Heartwood Hotel series.
Kallie George is the author of the Magical Animal Adoption Agency series, as well as the Heartwood Hotel series. She works as an author and speaker in Vancouver, Canada, and she holds a master's in children's literature from the University of British Columbia. In addition to writing books for young readers, she leads workshops for aspiring writers.

Born during a blizzard on Groundhog Day in Chicago, Illinois, Stephanie Graegin spent her childhood drawing and collecting fauna in Fort Wayne, Indiana and Houston, Texas. She received her BFA in Fine Arts from the Maryland Institute College of Art in Baltimore, Maryland. She later attended Pratt Institute in Brooklyn, New York, obtaining a Master of Fine Arts in Printmaking. Stephanie now lives in Brooklyn, is still drawing, and has managed to keep her collection down to one orange cat. Find out more at graegin.com.