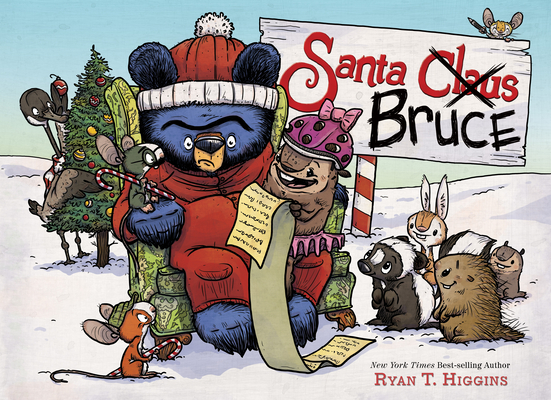 By Ryan Higgins, Ryan Higgins (Illustrator)
List Price: $17.99
Our Price: $16.19
(Save: $1.80 10%)
Often on our shelves, but if we're out, we can usually restock quickly
Bruce is a lot of things. He is a bear. He is a grump. He is a pretty decent cook. And he is a mother.
One thing Bruce is not?
Santa Claus.
But that doesn’t stop the whole forest from lining up to give him their Christmas wishes when he becomes the victim of mistaken identity—again.
Kids will howl with laughter as award-winning author-illustrator Ryan T. Higgins delivers another hilarious story about this bear who just can't catch a break.
Ryan T. Higgins (ryanthiggins.com) is an author and illustrator who likes the outdoors and cheese sandwiches. He is NOT a grumpy old black bear, but he DOES like making books about one—starting with the New York Times best-selling Mother Bruce, which received the E. B. White Read-Aloud Award and the Ezra Jack Keats New Illustrator Honor. He also wrote and illustrated Hotel Bruce, BE QUIET!, Bruce's Big Move, and We Don't Eat Our Classmates. Ryan lives in Maine with his wife and kids . . . and too many pets.
PRAISE FOR BE QUIET!

* "Higgins has once again drawn up a winner."—Kirkus Reviews, starred review

* "This hilarious and fun read-aloud will be a hit at storytime."—School Library Journal, starred review

"A funny, delightful argument both for and against a hermitic life."—Kirkus Reviews

"As cheekily funny as the illustrations are, even funnier is their juxtaposition with the often understated narration. . . . A merry, witty celebration of chaos and grumpiness."—Kirkus Reviews

"The illustrations are delightful, with lots of visual humor for those who pay attention to details. . . . This latest installment is sure to enchant a wide audience."—School Library Journal