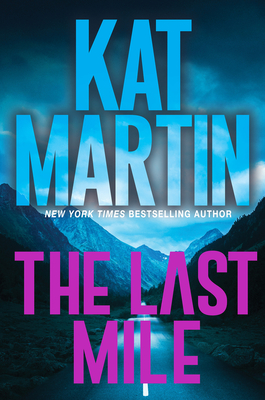 By Kat Martin
List Price: $27.00
Our Price: $24.30
(Save: $2.70 10%)
Often on our shelves, but if we're out, we can usually restock quickly
The New York Times bestselling author pairs a woman in search of her family's truth with a hard-hitting professional treasure hunter in this taut and thrilling new book. As an unknown assailant stalks them across the treacherous Superstition Mountains in Arizona, they race to follow their treasure map’s directions to a hidden trove of gold, but will they survive the danger long enough to reach their prize?

When Abigail Holland awakes to the sound of a nighttime intruder in her rambling Denver Victorian, she knows exactly what the black shrouded figure is after—the map she recently inherited from her grandfather. Whoever he is, the man who grapples with her, then escapes, is willing to kill for the location of a treasure King Farrell hunted for more than ten years. The Devil’s Gold has claimed hundreds of lives, and it was her grandfather’s obsession.

With a killer pursuing her and her own family not to be trusted, Abby decides to take up the search herself. But she’ll need help to do it, and there’s no one better than renowned explorer and treasure hunter Gage Logan. Despite the instant chemistry between them, Gage is reluctant. Innocent people have been hurt on his watch before. But when Abby shows him a genuine gold ingot she found with the map, his curiosity is piqued. Before long they’re heading into the flash floods and brutal winds of the Superstition Mountains, straight into a passionate entanglement—and the dark heart of danger.
Kat Martin is the New York Times bestselling author of more than sixty books across multiple genres. Sixteen million copies are in print and she has been published in twenty-one foreign countries, including Japan, France, Argentina, Greece, China, and Spain. Her books have been nominated for the prestigious RITA award and won both the Lifetime Achievement and Reviewer’s Choice Awards from RT Book Reviews. She and her husband, the author L.J. Martin, live in Montana and spend their winters in Ventura, California. Visit her online at KatMartin.com.

Praise for The Last Mile

“The couple’s charged connection and the plot’s heart-stopping twists will keep readers breathless until the final page. This smart, sexy thrill ride will hook readers who like their romance with a side of danger.”
—Publishers Weekly

"Martin revs the power from page one of this fast-paced romantic thriller… Fans of romantic suspense won’t be able to put this book down until the final page is turned, and Martin is likely to recruit thriller readers as well."
—Publishers Weekly on The Deception

“An un-put-down-able page-turner that's sure to satisfy fans of romance and thrillers alike.”
—Kirkus Reviews on The Deception

“Martin keeps the twists and turns coming in the sensuous and spirited first Maximum Security romantic thriller…Readers willfind it hard to wait for the next book in this tantalizing series.”
—Publishers Weekly on The Conspiracy

“Kat Martin is a fast gun when it comes to storytelling, and I love her books.”
—#1 New York Times bestselling author Linda Lael Miller

“Filled with suspense, action and sizzling scenes, the pages of this book practically turn themselves.”
—Bookpage on Beyond Danger

“The kind of taut, edge-of-your-seat action you crave from a suspenseful book.”
—Bustle on Beyond Reason

“[A] romantic, suspenseful thriller.”
—In Touch on Beyond Reason

“Martin whips together unforgettable characters and a high-octane plot with more twists and turns than a street in SanFrancisco…. As the suspense unfurls at a breathtaking pace, readers will be captivated by this tale of drug dealers, foreignterrorists, bloody violence, and hot, steamy sex, all leading to a shocking ending. Martin’s fans and newcomers alike will enjoyevery moment of this thrill ride.”
—Publishers Weekly, STARRED REVIEW for Beyond Reason

"A high-octane mix of high stakes and high passion."
—Bookpage on Into the Whirlwind

“Intense mystery and sensual love scenes will lure readers into this novel and not let go until the final page is turned.”
—Publishers Weekly on Against the Wild