Intimate Violence: Anti-Jewish Pogroms on the Eve of the Holocaust (Hardcover) 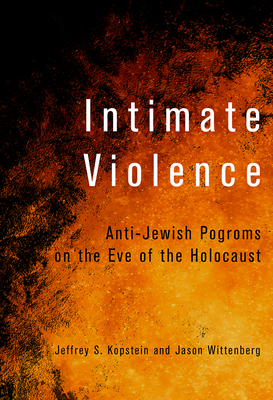 Intimate Violence: Anti-Jewish Pogroms on the Eve of the Holocaust (Hardcover)

Why do pogroms occur in some localities and not in others? Jeffrey S. Kopstein and Jason Wittenberg examine a particularly brutal wave of violence that occurred across hundreds of predominantly Polish and Ukrainian communities in the aftermath of the Nazi invasion of the Soviet Union. The authors note that while some communities erupted in anti-Jewish violence, most others remained quiescent. In fact, fewer than 10 percent of communities saw pogroms in 1941, and most ordinary gentiles never attacked Jews.

Intimate Violence is a novel social-scientific explanation of ethnic violence and the Holocaust. It locates the roots of violence in efforts to maintain Polish and Ukrainian dominance rather than in anti-Semitic hatred or revenge for communism. In doing so, it cuts through painful debates about relative victimhood that are driven more by metaphysical beliefs in Jewish culpability than empirical evidence of perpetrators and victims. Pogroms, they conclude, were difficult to start, and local conditions in most places prevented their outbreak despite a general anti-Semitism and the collapse of the central state. Kopstein and Wittenberg shed new light on the sources of mass ethnic violence and the ways in which such gruesome acts might be avoided.