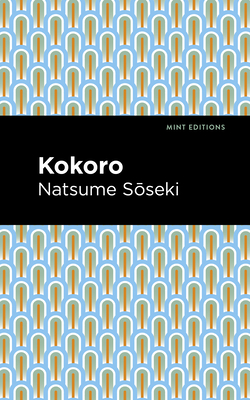 Kokoro (1914) is a novel by Natsume Sōseki. Set during a period of modernization in Japan, Kokoro is a story of family, faith, and tragedy that explores timeless themes of isolation and identity. Spanning generations, Kokoro is a classic novel from one of Japan's most successful twentieth century writers.

Tradition and change, life and death--such are the subjects of Sōseki's masterful, understated tale of unassuaged guilt. On vacation with a friend, the narrator meets an older man who becomes a patient mentor for the young student. Soon, he begins visiting Sensei and his wife at their home in Tokyo, where they live an affluent, simple life. As the years go by, the narrator becomes aware of a secret from Sensei's past, which his mentor promises to reveal when the time is right. When his father falls ill--around the time of the end of Meiji society--the narrator returns home to be closer to his family. As he tries to remain positive around so much sorrow, he begins to miss his Sensei, who is now getting old himself. As his father prepares to leave the mortal world, the narrator receives a lengthy letter from Tokyo, containing his Sensei's story within. As one era merges into the next, he reads of the suffering and mistakes his Sensei experienced and incurred on his path through life, drawing them closer and leaving the narrator with some wisdom to remember him by. Eminently human, Kokoro is a beloved story of isolation, morality, and conflict from a master of Japanese fiction.

With a beautifully designed cover and professionally typeset manuscript, this edition of Natsume Sōseki's Kokoro is a classic work of Japanese literature reimagined for modern readers.