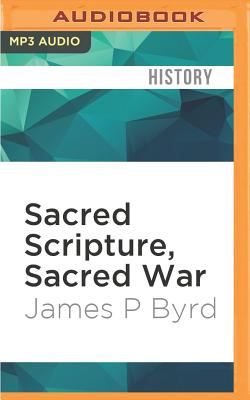 On January 17, 1776, one week after Thomas Paine published his incendiary pamphlet "Common Sense," Connecticut minister Samuel Sherwood preached an equally patriotic sermon. "God Almighty, with all the powers of heaven, are on our side," Sherwood said, voicing a sacred justification for war that Americans would invoke repeatedly throughout the struggle for independence.

In Sacred Scripture, Sacred War, James Byrd offers the first comprehensive analysis of how American revolutionaries defended their patriotic convictions through scripture. Byrd shows that the Bible was a key text of the American Revolution. Indeed, many colonists saw the Bible as primarily a book about war. They viewed God as not merely sanctioning violence but actively participating in combat, playing a decisive role on the battlefield. When war came, preachers and patriots alike turned to scripture not only for solace but for exhortations to fight. Such scripture helped amateur soldiers overcome their natural aversion to killing, conferred on those who died for the Revolution the halo of martyrdom, and gave Americans a sense of the divine providence of their cause.

Many histories of the Revolution have noted the connection between religion and war, but Sacred Scripture, Sacred War is the first to provide a detailed analysis of specific biblical texts and how they were used, especially in making the patriotic case for war. Combing through more than 500 wartime sources, which include more than 17,000 biblical citations, Byrd shows precisely how the Bible shaped American war, and how war in turn shaped Americans' view of the Bible.