The Last Good Season: Brooklyn, the Dodgers, and Their Final Pennant Race Together (MP3 CD) 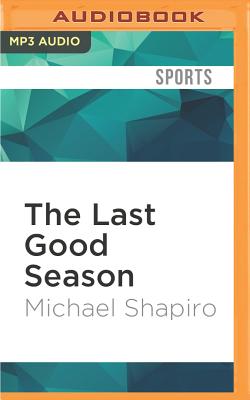 The Last Good Season: Brooklyn, the Dodgers, and Their Final Pennant Race Together (MP3 CD)

In the bestselling tradition of The Boys of Summer and Wait 'Til Next Year, The Last Good Season is the poignant and dramatic story of the Brooklyn Dodgers' last pennant and the forces that led to their heartbreaking departure to Los Angeles.

The 1956 Brooklyn Dodgers were one of baseball's most storied teams, featuring such immortals as Jackie Robinson, Pee Wee Reese, Duke Snider, Gil Hodges, and Roy Campanella. The love between team and borough was equally storied, an iron bond of loyalty forged through years of adversity and sometimes legendary ineptitude. Coming off their first World Series triumph ever in 1955, against the hated Yankees, the Dodgers would defend their crown against the Milwaukee Braves and the Cincinnati Reds in a six-month neck-and-neck contest until the last day of the playoffs, one of the most thrilling pennant races in history.

But as The Last Good Season so richly relates, all was not well under the surface. The Dodgers were an aging team at the tail end of its greatness, and Brooklyn was a place caught up in rapid and profound urban change. From a cradle of white ethnicity, it was being transformed into a racial patchwork, including Puerto Ricans and blacks from the South who flocked to Ebbets Field to watch the Dodgers' black stars. The institutions that defined the borough--the Brooklyn Eagle, the Brooklyn Navy Yard--had vanished, and only the Dodgers remained. And when their shrewd, dollar-squeezing owner, Walter O'Malley, began casting his eyes elsewhere in the absence of any viable plan to replace the aging Ebbets Field and any support from the all-powerful urban czar Robert Moses, the days of the Dodgers in Brooklyn were clearly numbered.

Michael Shapiro, a Brooklyn native, has interviewed many of the surviving participants and observers of the 1956 season, and undertaken immense archival research to bring its public and hidden drama to life. Like David Halberstam's The Summer of '49, The Last Good Season combines an exciting baseball story, a genuine sense of nostalgia, and hard-nosed reporting and social thinking to reveal, in a new light, a time and place we only thought we understood.