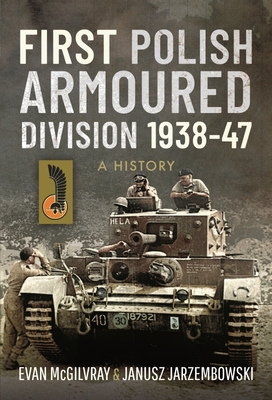 By Evan McGilvray
List Price: $42.95
Our Price: $38.66
(Save: $4.30 10%)
The First Polish armored Division was formed in Scotland in February 1942 from Polish exiles who had escaped first Poland and then France. Its commander, Stanislaw Maczek, and many of its men had previously served in Polish 10th Motorized Cavalry Brigade (10 BKS), which had taken part in the Polish invasion of Czechoslovakia in 1938 and given a good account of itself in the defense of Poland against German and Soviet invasion of 1939. Under Maczek's leadership the division was trained and equipped along British lines in preparation for the invasion of France.

Attached to 1st Canadian Army, the division was sent to Normandy in late July 1944. It suffered heavily during Operation Totalize but went on to play a crucial role in preventing an orderly German withdrawal from the Falaise Pocket by its stand at Hill 262. They then played their part in the advance across Western Europe and into Germany.

This detailed history, supported by dozens of archive photos, concludes by looking at the often-poor treatment of Maczek and his men after the war.