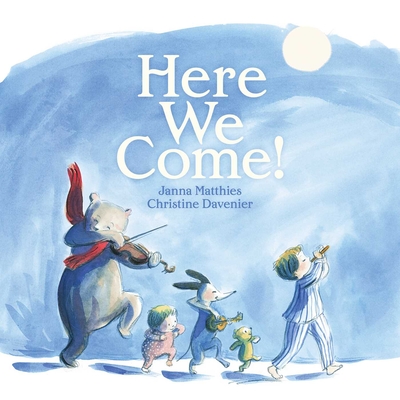 By Janna Matthies, Christine Davenier (Illustrator)
List Price: $17.99
Our Price: $16.19
(Save: $1.80 10%)
Often on our shelves, but if we're out, we can usually restock quickly
Join a cast of friends, human and animal alike, as they embark on a musical read-aloud adventure in this upbeat, joyful picture book.

A boy sets off with his flute and his stuffed bear and a rum-pum-pum. As they make their way through the town and the woods, they ask, “Wanna come?” Soon, kids and creatures join in the fun one by one, playing instruments, singing, and dancing to the catchy tune.

But will a storm bring their fun-filled musical parade to an end?
Janna Matthies is a picture book author and early elementary music teacher in Indianapolis. Her books include the forthcoming Here We Come!; God’s Always Loving You; Two Is Enough, which made the 2016 Bank Street list and New York Times Book Review; The Goodbye Cancer Garden, which earned an School Library Journal starred review; Peter, the Knight with Asthma; and Monster Trucks. Janna is a long-time volunteer with the Indiana SCBWI and  provides editorial services to the Indianapolis Symphony Orchestra for picture books supporting their Teddy Bear Concert Series. When she’s not writing or making music, Janna can be found digging in the garden, swimming laps, walking Juneau the howling Husky, or keeping up with her husband and three mostly-grown kids.

Christine Davenier’s favorite dessert is profiterole au chocolat. She is the illustrator of many books for children including the Iris and Walter series by Elissa Haden Guest and The First Thing My Mama Told Me by Susan Marie Swanson, for which Christine received a New York Times Book Review Best Illustrated Children’s Book of the Year Award. She lives in Paris.