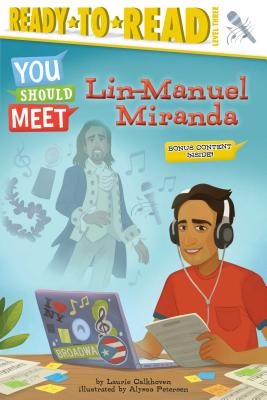 By Laurie Calkhoven, Alyssa Petersen (Illustrator)
List Price: $4.99
Our Price: $4.49
(Save: $0.50 10%)
Often on our shelves, but if we're out, we can usually restock quickly
Get to know Lin-Manuel Miranda, the award-winning creator of Hamilton: An American Musical, in this fascinating nonfiction Level 3 Ready-to-Read, part of a series of biographies about people “you should meet!”

Meet Lin-Manuel Miranda! Lin-Manuel is a writer, singer, actor, songwriter, and rapper who created the hit Broadway musicals In the Heights and Hamilton: An American Musical. He was also the cocomposer of Disney’s Moana and is the star of the upcoming film, Mary Poppins Returns, with Emily Blunt. His creativity appeals to children and adults alike and he has already won a Tony, Emmy, Grammy, and a Pulitzer Prize for his work. Learn all about how he grew up and the things he’s accomplished so far in this Level 3 Ready-to-Read that’s perfect for beginning readers.

A special section at the back of the book includes extras like the history of Puerto Rico and how to write a play. With the You Should Meet series, learning about historical figures has never been so much fun!
Laurie Calkhoven is the author of many books, including George Washington: An American Life and Harriet Tubman: Leading the Way to Freedom. She lives in New York City. Visit her at LaurieCalkhoven.com.

Alyssa Petersen was born and raised in Southern California, spending many happy days at the beach and Disneyland. She always knew that she wanted to be an artist, but it was in her teenage years that she discovered the world of Concept Art and Visual Development, and she knew that was exactly what she wanted to do. Alyssa attended Brigham Young University and received a BFA in Animation, and took a handful of illustration classes. Alyssa currently works as a concept artist for Disney Interactive, where she has worked on Disney Infinity 2.0 & 3.0. Although she and her husband move often, they currently reside in California.