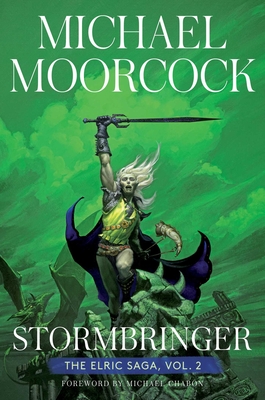 This is book number 2 in the Elric Saga, The series.

In one of the most well-known and well-loved fantasy epics of the 20th century, Elric is the brooding, albino emperor of the dying Kingdom of Melnibone. After defeating his nefarious cousin and gaining control over the epic sword, Stormbringer, Elric, prince of ruins, must decide what he’s willing to sacrifice in a fight against Armageddon.

Stormbringer is the second in Michael Moorcock’s incredible series, which has transformed the fantasy genre for generations. Perfect for fans new and old, this book is brought to life once more with stunning illustrations from the most lauded artists in fantasy.
Michael Moorcock is one of the most important and influential figures in speculative fiction and fantasy literature. Listed recently by The Times (London) as among the fifty greatest British writers since 1945, he is the author of 100 books and more than 150 shorter stories in practically every genre. He has been the recipient of several lifetime achievement awards, including the Prix Utopiales, the SFWA Grand Master, the Stoker, and the World Fantasy, and has been inducted into the Science Fiction Hall of Fame. He has been awarded the Nebula Award, the World Fantasy Award, the John W. Campbell Award, the British Fantasy Award, the Guardian Fiction Prize, and has been shortlisted for the Whitbread Award. He has been compared to Balzac, Dickens, Dumas, Ian Fleming, Joyce, and Robert E. Howard, to name a few.

Michael Chabon is the bestselling and Pulitzer Prize–winning author of many books, including The Amazing Adventures of Kavalier & Clay, The Yiddish Policemen’s Union, Gentlemen of the Road, Telegraph Avenue, Moonglow, Pops, and the picture book The Astonishing Secret of Awesome Man. He is the editor, with Ayelet Waldman, of Kingdom of Olives and Ash: Writers Confront the Occupation and Fight of the Century.
"[Moorcock] is the greatest writer of post-Tolkien British Fantasy."—Michael Chabon, Pulitzer Prize winning author of The Amazing Adventures of Kavalaier & Clay, and Telegraph Avenue

"Moorcock’s influence is nothing like Tolkien’s, at least on the surface, but his vision of a speculative-fiction genre that can be psychologically complex is evident in how very sophisticated some of it has become—from “True Detective” to Jeff VanderMeer, from David Mitchell to “Under the Skin.”—The New Yorker

"Moorcock as the most important successor to Mervyn Peake and Wyndham Lewis... The vast, tragic symbols by which Moorcock continually illuminates the metaphysical quest of his hero are a measure of the author’s remarkable talents"—J.G.Ballard, author of Empire of the Sun, Crash, and The Drowned World

"[Moorcock] can gleefully give you all the formulae of every kind of story there ever was, because he's tried and tested all of them ... the master story-teller of our time."—Angela Carter author of The Bloody Chamber, and Nights at the Circus

"If you are at all interested in fantastic fiction, you must read Michael Moorcock. He changed the field single-handedly: He is a giant."—Tad Williams, bestselling author of The Dragonbone Chair trilogy

"[Elric] is far and away the coolest, grimmest, moodiest, most elegant, degenerate, drug-addicted, cursed, twisted and emotionally weird mass murderer of them all."
— NPR