Carla and the Christmas Cornbread (Hardcover) 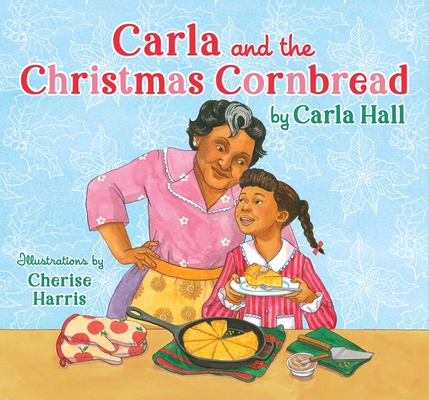 Carla and the Christmas Cornbread (Hardcover)

By Carla Hall, Cherise Harris (Illustrator)
List Price: $17.99
Our Price: $16.19
(Save: $1.80 10%)
Often on our shelves, but if we're out, we can usually restock quickly
In this heartwarming tale inspired by her childhood, superstar chef and TV host Carla Hall shares the story of young Carla, who eats a sugar cookie meant for Santa on the night before Christmas and tries to make things right.

Christmas is Carla’s favorite holiday of the year. She goes to her grandparents’ house and eats grandma’s special recipe—a perfectly delicious cornbread. She listens to her grandpa Doc’s marvelous stories about traveling the world. And, best of all, she spends lots of time with her family.

But when Carla accidentally takes a bite out of Santa’s sugar cookie, she thinks she’s ruined Christmas. How will Santa know to stop at their house if they don’t leave him a midnight snack? With her grandmother’s help, Carla comes up with a plan, but will it be enough to save Christmas?
Carla Hall attended L’Academie de Cuisine in Maryland. She gained her audience when she competed on Bravo’s Top Chef and Top Chef: All Stars. She has been a TV personality since then, cohosting on the ABC talk show The Chew, contributing on Good Morning America, and featuring as a judge on Crazy Delicious on Netflix and on Bakeaway Camp on the Food Network. She is the author of Carla’s Comfort Foods, Cooking with Love, and Carla Hall’s Soul Food, which received an NAACP Image Awards nomination. She lives in Washington D.C. with her husband. Visit carlahall.com for more.

Cherise Harris is an illustrator from Barbados. Her work centers around an interest in fairy tale and its role in telling deep and meaningful stories. Cherise uses pencil, watercolor, and clay, exploring her ideas in both 2D and 3D form. She also uses Photoshop to create digital art and gifs. She received her associate’s degree in visual arts at the Barbados Community College, her BFA in illustration at the School of Visual Arts in New York City, and most recently completed her master’s in illustration at Falmouth University in the UK. Cherise currently lives back home in Barbados with her husband, Ryan, and her daughter.
"With expressive illustrations that set the story in the early 1970s and evoke the Christmas mood in the context of a loving Black family, this tale reminds readers that love and good intentions can almost always save the day. Readers will be eager to try out the cornbread recipe included in the endmatter...[h]eartwarming and cozy."
— Kirkus Reviews