The Mongol Storm: Making and Breaking Empires in the Medieval Near East (Hardcover) 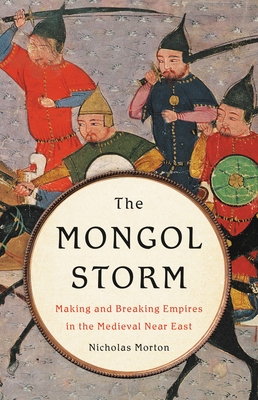 The Mongol Storm: Making and Breaking Empires in the Medieval Near East (Hardcover)

By Nicholas Morton
List Price: $35.00
Our Price: $31.50
(Save: $3.50 10%)
Often on our shelves, but if we're out, we can usually restock quickly
How the Mongol invasions of the Near East reshaped the balance of world power in the Middle Ages

For centuries, the Crusades have been central to the story of the medieval Near East, but these religious wars are only part of the region’s complex history. As The Mongol Storm reveals, during the same era the Near East was utterly remade by another series of wars: the Mongol invasions.

In a single generation, the Mongols conquered vast swaths of the Near East and upended the region’s geopolitics. Amid the chaos of the Mongol onslaught, long-standing powers such as the Byzantines, the Seljuk Turks, and the crusaders struggled to survive, while new players such as the Ottomans arose to fight back. The Mongol conquests forever transformed the region, while forging closer ties among societies spread across Eurasia.

This is the definitive history of the Mongol assault on the Near East and its enduring global consequences.

Nicholas Morton is an associate professor at Nottingham Trent University. The author or editor of nine books, including The Field of Blood, Morton lives in Nottinghamshire, UK.
“The Mongol Storm is an elegant reproach to the sort of academic history seen in narrow studies that are of interest only to other academic historians, exclude the general reader and, worst of all, are frankly unreadable. It is a reminder that the best history writing…is eminently readable. What is the point of it otherwise?” —Justin Marozzi, The Sunday Times

“[An] erudite, often thrilling and much-needed study…This is imperial history at its most ‘complex and messy’, but Morton passes little judgement…instead, he scrupulously contextualises all the actors within the belief systems of their day, and the harsh realities of their lives.”—Paul Lay, The Daily Telegraph

“With powerful prose, Morton leads readers through the complicated affairs of the Medieval Near East…A virtue of Morton’s book is that it doesn’t simplify anything but makes the most complicated parts understandable. For anyone who loves history, especially with military and diplomatic focuses.” —Library Journal

“This expert study casts the Middle Ages in a new light.”—Publishers Weekly

“This is the most exciting study of the Mongols and their encounters with the peoples of the Near East I have ever read. It is a story of epic proportions demanding much from an historian. Morton rises to the challenge. His scholarship is impeccable, and his judgments are judicious and compelling. He has an exceptional facility for finding the apt quotation to underscore his points, and his prose is precise, clear, and elegant. I found it extremely difficult to put this marvelous book down.”—William Chester Jordan, Princeton University

“When Mongol armies arrived in the Near East in the later Middle Ages, they transformed the region utterly and irreversibly. Nicholas Morton’s new history of their extraordinary deeds and conquests is deeply researched and elegantly written—essential reading for anyone interested in the descendants of Genghis Khan in the age of the Crusades.”—Dan Jones, New York Times-bestselling author of The Templars

“Morton’s The Mongol Storm is a well-researched and lucidly written book that will transform thinking about the great transitions of the Middle Ages. The phenomenon of Mongol expansion in the thirteenth century is usually told from the perspective of its Central Asian origins. Here, readers find the story of how the largest land empire in human history pushed westward into the Middle East, almost reaching Egypt itself. As medieval studies expands its focus onto more global connections, Morton’s book enables readers to see how war and trade, fear of violence, and desire for material goods tied this vast expanse together. This is a history we’ve been needing for some time."—Monica Green, fellow, the Medieval Academy of America, and independent scholar

“This outstanding book takes a deep look at Mongol history and the Islamic world over two centuries. Rulers of the largest land empire in history, extending from Korea to Poland, the Mongols are today often associated with conquest and destruction. In The Mongol Storm, Morton complicates these misconceptions, unearthing a wealth of references to their religious tolerance and their dissemination of revolutionary Asian technologies and cultures to the Middle East. He brilliantly examines the conflicts and alliances between the Mongols, Crusaders, Byzantines, and innumerable Muslim powers. Morton’s invaluable book shows how the Muslim world was profoundly reconfigured, and the broader history of our planet influenced for centuries to come, by the mandate from heaven.”—Taef El-Azhari, University of Helwan, Egypt

“An accessible and gripping narrative of the most important developments of the late medieval Near East.”—Anthony Kaldellis, University of Chicago