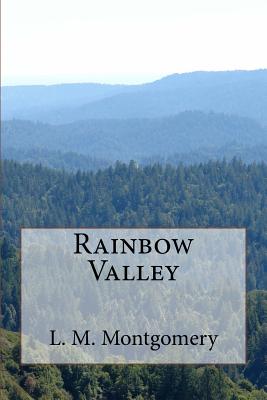 This is book number 7 in the Anne of Green Gables series.

Rainbow Valley (1919) is the seventh book in the chronology of the Anne of Green Gables series by Lucy Maud Montgomery, although it was the fifth book published. In this book Anne Shirley is married with six children, but the book focuses more on her new neighbor, the new Presbyterian minister John Meredith, as well as the interactions between Anne's and John Meredith's children. The book is dedicated: "To the memory of Goldwin Lapp, Robert Brookes and Morley Shier who made the supreme sacrifice that the happy valleys of their home land might be kept sacred from the ravage of the invader." This refers to World War I, which is the main theme of the next and final book in the series, Rilla of Ingleside.
Lucy Maud Montgomery (November 30, 1874 - April 24, 1942) was a Canadian author best known for a series of novels beginning in 1908 with Anne of Green Gables. The book was an immediate success. The central character, Anne Shirley, an orphaned girl, made Montgomery famous in her lifetime and gave her an international following. The first novel was followed by a series of sequels with Anne as the central character. Montgomery went on to publish 20 novels as well as 530 short stories, 500 poems, and 30 essays. Most of the novels were set in Prince Edward Island, and locations within Canada's smallest province became a literary landmark and popular tourist site-namely Green Gables farm, the genesis of Prince Edward Island National Park. She was made an officer of the Order of the British Empire in 1935.