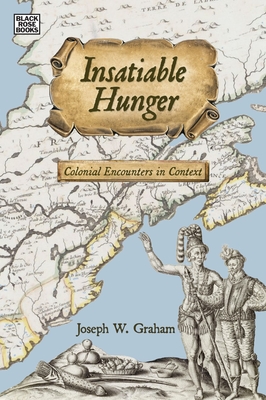 The sixteenth-century European wars of religion set the stage for mass migration to the New World. Of course, there was nothing new about the New World to Indigenous peoples who had lived there for millennia. Insatiable Hunger compares European historical accounts and Indigenous stories of contact to illustrate the wide cultural chasm that separated the two civilizations. Joseph Graham tells a story of religiously obsessed Europeans pouring onto the continent and consuming everything in their path and the attempts Indigenous peoples made to reason with the hungry newcomers. Tracing events from Jacques Cartier’s first visits in the sixteenth century to the War of 1812, Insatiable Hunger attempts to understand the root causes of the mutual incomprehension baked into these two civilizations’ worldviews. As descendants of European settlers in Canada and the United States confront the legacy of colonialism and genocide of Indigenous peoples, Insatiable Hunger will be an important primer on the worldviews at the root of this violent political project.
Joseph W. Graham is a self-taught historian who homesteads an organic farm near Mont-Tremblant, Quebec. He is the author of Naming the Laurentians and has founded two heritage protection committees while working to bridge divides in the community.

"Europeans doing good and getting rich. If you want to understand the toxic impact of Christianity and the market economy on the Indigenous peoples of North America, then read this book. If you want to reflect on the astonishing durability of Indigenous cultures and world views and the promise they hold for a planet in search of sustainability, read this book. A work of great erudition and passion."
— David Cameron, Professor of Political Science, University of Toronto

"This is an important work.  It struggles for truth and accuracy in unfolding the story of Canada.  I am not a fan of Canada.  Canada is the name of the empire that Britain gave our homelands to, but this is clear in the book. What is not clear is what do we do about it.  Reconciliation begins with truth and in this case, it is really our homeland, and nothing can be decided without us.  We must become the authors of a new story and I think the writer is taking us in that direction, bravely, doggedly and with grim determination."
— Lee Maracle is an award-winning poet, novelist, and teacher

"Twelve years in the making, Graham’s Insatiable Hunger makes no excuses for the blind ravages of the Euro-Christian invasion of North America. Grasping the distinction between the Indigenous American gift economy, with its emphasis on nature-connected sustainability, and the Euro-Christian market economy, with its emphasis on wealth accumulation at any cost (to others), Graham wends his way through the meta-history of European colonization, 1535−1814. He places it in the context of, on the one hand, the lack of any Indigenous need for Europeans in the Americas, and on the other hand, the invading Europeans’ desire to escape Christianity’s belligerent factions at home, even as they continued their internecine wars of all against all in America. Having escaped Christianity at home, European began imposing it on Indigenes. Locked in their cultural bubble, disdaining Indigenous societies, the French, Spanish, Dutch, Swedes, and British invaders then pushed relentlessly inland, spreading lethal diseases visiting mortality rates on Indigenous nations that fell below population sustainability. What disease and siege did not take, liquor did. Throughout, Graham’s lingering question is how the damage is repaired, as he urges moving from hierarchical markets to egalitarian gift relations. Eminently readable, Graham’s clear and unpretentious yet documented prose respects Indigenous stories as much as Euro-Christian stories in contrasting Indigenous female-male co-valence with European male dominance. "
— Barbara Alice Mann, Professor of Humanities at Jesup Scott Honors College