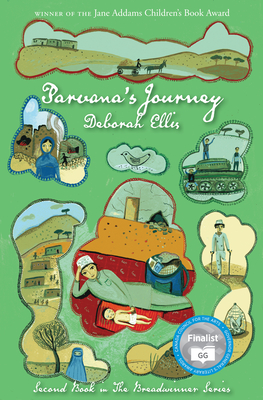 This is book number 2 in the Breadwinner series.

In 2001, a war is raging in Afghanistan as a coalition of Western forces tries to oust the Taliban by bombing the country. Parvana's father has died, and her mother, sister, and brother have gone to a faraway wedding, not knowing what has happened to her father. Parvana doesn't know where they are, but sets out alone to find them -- masquerading as a boy. Her journey only becomes more perilous as the bombs begin to fall. Making her way across the desolate Afghan countryside, she meets other children who are strays from the war: an infant boy in a bombed-out village, a nine-year-old girl who believes she has magical powers over land mines, and a boy with one leg. The children travel together because it is easier than being alone. As they forge their own family in the war zone that Afghanistan has become, their resilience, imagination and luck help them survive. The reissue includes a new cover and map, and an updated author's note and a glossary provide young readers with background and context. All royalties from the sale of this book go to Canadian Women for Women in Afghanistan. Parvana's Fund supports education projects for Afghan women and children.

Deborah Ellis is the author of over 18 books, many of them bestsellers worldwide. She lives in Simcoe, Ontario.