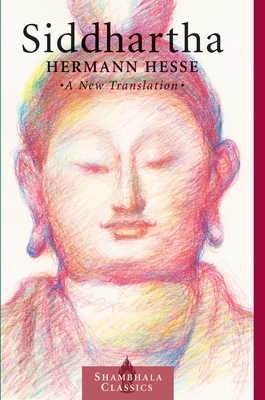 Nobel Prize–winning author: This classic of 20th-century literature chronicles the spiritual evolution of a man living in India at the time of the Buddha—a tale that has inspired generations of readers

Here is a fresh translation of the classic Herman Hesse novel, from Sherab Chödzin Kohn—a gifted translator and longtime student of Buddhism and Eastern philosophy. Kohn invites readers along Siddhartha’s spiritual journey—experiencing his highs and lows, loves and disappointments along the way. We first meet Siddhartha as a privileged brahmin’s son. Handsome, well-loved, and growing increasingly dissatisfied with the life expected of him, he then sets out on his journey, not realizing that he is fulfilling the prophesies proclaimed at his birth. Siddhartha blends in with the world, showing the reader the beauty and intricacies of the mind, nature, and his experiences on the path to enlightenment.

Sherab Chödzin Kohn’s flowing, poetic translation conveys the philosophical and spiritual nuances of Hesse’s text, paying special attention to the qualities of meditative experience. Also included is an extensive introduction by Paul W. Morris that discusses the impact Siddhartha has had on American culture.
Hermann Hesse was born in 1877 in Calw, Germany. He was the son and grandson of Protestant missionaries and was educated in religious schools until the age of thirteen, when he dropped out of school. At age eighteen he moved to Basel, Switzerland, to work as a bookseller and lived in Switzerland for most of his life. His early novels include Peter Camenzind (1904), Beneath the Wheel (1906), Gertrud (1910), and Rosshalde (1914). During this period Hesse married and had three sons.

During World War I Hesse worked to supply German prisoners of war with reading materials and expressed his pacifist leanings in antiwar tracts and novels. Hesse's lifelong battles with depression drew him to study Freud during this period and, later, to undergo analysis with Jung. His first major literary success was the novel Demian (1919).

When Hesse's first marriage ended, he moved to Montagnola, Switzerland, where he created his best-known works: Siddhartha (1922), Steppenwolf (1927), Narcissus and Goldmund (1930), Journey to the East (1932), and The Glass Bead Game (1943). Hesse won the Nobel Prize for Literature in 1946. He died in 1962 at the age of eighty-five.
“Filled with timeless truths and told so beautifully with images that burn deep into your being, Hesse’s novel speaks powerfully to every generation of spiritual seekers . . . A fresh translation of Siddhartha that offers greater authenticity than any other translation—while still preserving the unique beauty of the original prose.”
—Branches of Light