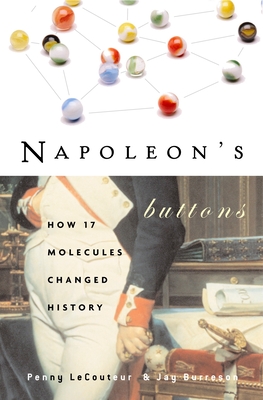 By Penny Le Couteur, Jay Burreson
List Price: $19.00
Our Price: $17.10
(Save: $1.90 10%)
Napoleon's Buttons is the fascinating account of seventeen groups of molecules that have greatly influenced the course of history. These molecules provided the impetus for early exploration, and made possible the voyages of discovery that ensued. The molecules resulted in grand feats of engineering and spurred advances in medicine and law; they determined what we now eat, drink, and wear. A change as small as the position of an atom can lead to enormous alterations in the properties of a substance-which, in turn, can result in great historical shifts.

With lively prose and an eye for colorful and unusual details, Le Couteur and Burreson offer a novel way to understand the shaping of civilization and the workings of our contemporary world.
PENNY CAMERON LE COUTEUR, PH.D., teaches chemistry at Capilano College in British Columbia, Canada, where she has been a professor for over thirty years. Winner of a Polysar Award for Outstanding Chemistry Teaching in Canadian Colleges, she was formerly the head of Capilano’s chemistry department and was chair of pure and applied sciences. She has written chemistry distance-education courses, coauthored a chemistry textbook, and served as a project adviser in chemistry for universities in eastern Indonesia. She was born in Auckland, New Zealand, and now lives in North Vancouver.

JAY BURRESON, PH.D., has worked as an industrial chemist and held a National Institutes of Health special fellowship for research on chemical compounds in marine life. He is also the general manager of a high-tech company.

"The authors unearth a wealth of anecdotes from all parts of the world and use them effectively to illustrate the technological underpinnings of modern society. Thoughtful, often surprising, smoothly written."
—Kirkus Reviews

"Entertaining accounts of how various objects' chemical properties might have changed history."
—Library Journal
"What does the fiery compound C17H19O3N have to do with the discovery of North America? Plenty, according to this remarkable collection of scientific sleuthings. The book's cases -- especially the chapter blaming Napoleon's disastrous Russian campaign on the eponymous tin fasteners that failed to hold French uniforms together -- unfold like CSI meets the History Channel. A splendid example of better reading through chemistry.  B+"
—Entertainment Weekly

"This book is both original and fascinating; I was quickly absorbed by this refreshing mix of science and history; I learned a lot of both and read this book quite quickly for a science book."