The Value of the Moon: How to Explore, Live, and Prosper in Space Using the Moons Resources (Paperback) 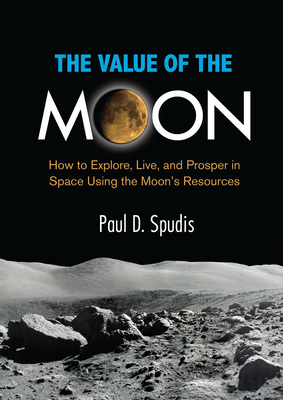 The Value of the Moon: How to Explore, Live, and Prosper in Space Using the Moons Resources (Paperback)

By Paul D. Spudis
List Price: $18.99
Our Price: $17.09
(Save: $1.90 10%)
Often on our shelves, but if we're out, we can usually restock quickly
While the Moon was once thought to hold the key to space exploration, in recent decades, the U.S. has largely turned its sights toward Mars and other celestial bodies instead. In The Value of the Moon, lunar scientist Paul Spudis argues that the U.S. can and should return to the moon in order to remain a world leader in space utilization and development and a participant in and beneficiary of a new lunar economy.

Spudis explores three reasons for returning to the Moon: it is close, it is interesting, and it is useful. The proximity of the Moon not only allows for frequent launches, but also control of any machinery we place there. It is interesting because recorded deep on its surface and in its craters is the preserved history of the moon, the sun, and indeed the entire galaxy. And finally, the moon is useful because it is rich with materials and energy. The moon, Spudis argues, is a logical base for further space exploration and even a possible future home for us all. Throughout his work, Spudis incorporates details about man's fascination with the moon and its place in our shared history. He also explores its religious, cultural, and scientific resonance and assesses its role in the future of spaceflight and our national security and prosperity.
Paul D. Spudis is a senior lunar scientist with a PhD in Geology who specializes in the histories and processes of the terrestrial planets. He has won numerous awards for his work, including the NASA Distinguished Public Service Medal and the 2011 Space Pioneer Award of the National Space Society. He has authored more than one hundred scientific papers and six books, including The Once and Future Moon.
"It holds the secrets of our distant past. It is the key to our future in space. And best of all, it is right next door. In this compelling book, one of the world's top lunar scientists shows why, if we really want to get to Mars, we must begin on the Moon."
-- Andrew Chaikin, author of A Man on the Moon

“A lucidly written exploration of why the Moon has always been part of our culture and how it could be humanity’s future home and resource base.”
-- Francis French, co-author of Falling to Earth and author of In the Shadow of the Moon

“Paul Spudis provides a compelling rationale of why the Moon constitutes America’s critical stepping stone into deeper regions of space. As Dr. Spudis clearly articulates, any successful mission to Mars requires the development of the Moon, which would also provide a long-term fusion energy resource for the Earth and space propulsion.”
-- Harrison H. Schmitt, Apollo 17 astronaut, geologist, former U.S. Senator

KIRKUS REVIEWS
Renowned geologist and lunar scientist Spudis (Blogging the Moon, 2011, etc.) makes a compelling argument that the moon's many available resources may jump-start mankind's pursuit of space travel. In the late 2000s, the news that the moon holds millions, possibly billions, of tons of ice at each pole stunned and excited the space science community. Ice is invaluable for two major reasons: it can be melted into liquid water, and its constituent parts (hydrogen and oxygen) can be harnessed and converted to rocket fuel. Additionally, lunar probes show that small areas near each pole are illuminated by the sun for most of the year, making them ideal locations for solar arrays to generate usable energy. The author writes that the lunar "resource bonanza" is tantalizing to those who hope to send humans back to the moon and beyond, as it eliminates the need for such resources to be hauled in from Earth. In approachable if at times technical prose, Spudis argues that the moon has everything we need to build a permanent moon base and that doing so can lay the foundation of a space transportation network. In fact, he argues that a manned trip to Mars may only be feasible if we establish a launch pad on the moon. To contextualize such an endeavor, this book is packed with historical, political, and cultural history about mankind's on-again, off-again relationship with the moon, a saga in which the author has been intimately entwined. Spudis also provides a literal road map to settling on the moon that is tremendously exciting to ponder. The author's deep knowledge and contagious opt imism—even in the face of considerable government bureaucracy—make for fascinating reading that, happily, is not science fiction. A readable book sure to charm and thrill anyone interested in space exploration.

BOOKLIST
Since Spudis’ prior popular work, The Once and Future Moon (1996), there has been a startling discovery: Earth’s closest celestial neighbor has water. Involved in the research into this revelation, Spudis summarizes the evidence as a prelude to this book’s main argument: that the objective of America’s human spaceflight program should be a permanent presence on the moon. NASA is intent, instead, on reaching an asteroid or Mars. Criticizing those destinations for scientific and technical reasons, Spudis also asserts that NASA will never receive enough money for these destinations. Thus, space policy ought to refocus on the moon because, in Spudis’ repeated, slogan-like phrase, “it’s close, it’s interesting, and it’s useful.” Presenting a methodical plan to establish a base, Spudis insists his ideas are within NASA’s budget. If frugality doesn’t convince them, Spudis suggests a strategic competition, noting that there is a new race to the moon with just one contestant: China. Realistic in its attention to political constraints, Spudis’ lucid argument will persuade space enthusiasts that a return to the moon is the right direction for America’s space program.— Gilbert Taylor

FORBES
The Value of the Moon should be required reading for anyone interested in the future of spaceflight.

CHOICE
The Value of the Moon presents a strong case for returning crewed missions to the Moon and establishing a permanent lunar base as a principal goal of the United States space program. Author Spudis, a lunar scientist, has long been the leading spokesperson for engineers and scientists favoring these objectives. These missions would implement in situ resource utilization (ISRU), making the Moon a logical stepping stone to places beyond—especially Mars. ISRU would include extracting water from cold crater bottoms near the lunar poles, building structures with lunar materials, generating rocket propellant, and more—all done with solar power harvested from certain elevated polar locations that receive abundant sun exposure. However, when proposed programs have costs that exceed billions of dollars, the government, NASA, and the scientific community dominate. Lunar advocates have been unable to obtain funding for a manned program, as targeting Mars is preferred—see Human Spaceflight: From Mars to the Stars, by Louis Friedman (CH, Sep'16, 54-0184). Spudis’ work is recommended for undergraduates and above, as well as those who are interested in space policy or the future of space travel.