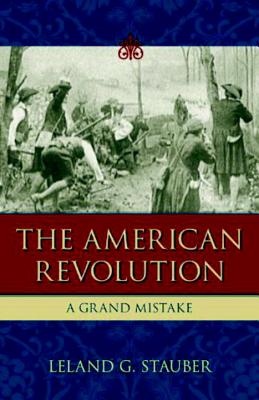 In this iconoclastic assessment of America’s War of Independence, political scientist Leland G. Stauber presents a fundamental reinterpretation of the birth and the subsequent development of the United States. He challenges head-on the prevailing American national saga, arguing that our independence from Britain was premature and that the experience of Canada has in many ways been preferable. Avoiding polemic, Stauber in a calmly analytic tone lays out both the positive and negative consequences of the American Revolution.
While recognizing the seminal historic importance of the Declaration of Independence, the American rejection of titled nobility and monarchy, and universal white, male suffrage, as well as the advantages of early economic independence, Stauber points out four major disadvantages resulting from the American Revolution:

• The most obvious of these is the dilemma of slavery, which was left unaddressed by our war with Britain and set the stage for the American Civil War. Slavery had already been outlawed in several major parts of the British Empire in 1833.
• Stauber also contends that a "legislative union" along the lines of the British North America Act of 1867, which created the Dominion of Canada, is a superior method of national unification to the purely voluntary federation of the United States.
• The American system of government, based on checks and balances, is often cumbersome in dealing with contemporary challenges, which are often not so difficult for parliamentary governments.
• The underlying American mind-set regarding the role of government contains a deep-seated suspicion of a strong central government, which dates back to our war against British tyranny. Stauber argues that this reluctance to use the central government to tackle major social problems cripples the United States from building a more decent society.
This challenging historical and political analysis of long-established American presumptions about our history and government will be of interest to students and scholars of political science and American history, as well as all open-minded citizens.

Leland G. Stauber (Carbondale, IL), now retired, was formerly an associate professor of political science at Southern Illinois University--Carbondale. He is the author of Land Ownership and the Social System and A New Program for Democratic Socialism: Lessons from the Market-Planning Experience in Austria.