The Day It Rained Militia: Huck's Defeat and the Revolution in the South Carolina Backcountry May-July 1780 (Military) (Paperback) 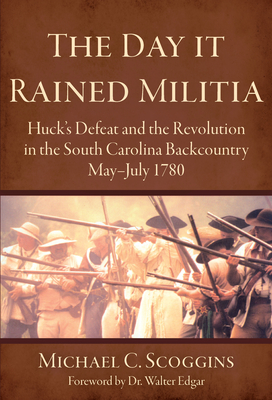 The Day It Rained Militia: Huck's Defeat and the Revolution in the South Carolina Backcountry May-July 1780 (Military) (Paperback)

Discover how Huck's Defeat spurred on the South Carolina militiamen to future victories during the Revolutionary War.

In July of 1780, when the Revolutionary War in the Southern states seemed doomed to failure, a small but important battle took place on James Williamson's plantation in what is now York County, South Carolina. The Battle of Williamson's Plantation, or Huck's Defeat as it later came to be known, laid the groundwork for the vicious partisan warfare waged by the militiamen on the Carolina frontier against the superior forces of the British Army, and it paved the way for the calamitous defeats that the British suffered at Hanging Rock, Musgrove's Mill, Kings Mountain, Blackstock's Plantation and Cowpens, all in the South Carolina backcountry. In this groundbreaking new study, historian Michael C. Scoggins provides an in-depth account of the events that unfolded in the Broad and Catawba River valleys of upper South Carolina during the critical summer of 1780. Drawing extensively on first-person accounts and military correspondence, much of which has never been published before, Scoggins tells a dramatic story that begins with the capture of an entire American army at Charleston in May and ends with a resounding series of Patriot victories in the Carolina Piedmont during the late summer of 1780---victories that set Lord Cornwallis and the British Army irrevocably on the road to defeat and to surrender at Yorktown in October 1781.