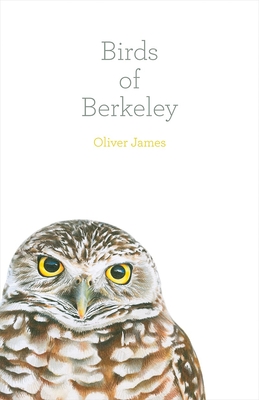 This charming, full-color field guide to 25 birds easily found in Berkeley proves that even the city's avian residents are a little quirky.

Meticulously detailed illustrations capture each bird's distinctive physicality and temperament. A Burrowing Owl faces you in a full-on head shot, perhaps having just raised its raspy, chattering alarm call as you trespass on its last remaining Bay Area foothold at the Marina. The Anna's Hummingbird gives you a coy backward glance to assess if you've properly admired its flashy throat feathers, maybe having just performed its signature J-shaped courtship dive. Even in composition, each bird is strikingly individual, whether depicted in mid-dive or creeping into frame. While descriptions of identification and vocalizations are straightforward, author-illustrator Oliver James takes a delightfully creative approach to his write-ups of each species. He invites you to imagine that a Cooper's Hawk, for example, is Steve McQueen in a '68 Mustang, and you, "a pigeon in a rental car with a poor turning radius," are fleeing through traffic: "It's all over in a matter of seconds." A joy to read and pore over, Birds of Berkeley will enchant readers far beyond the city limits with its findings gleaned from painstaking and patient wildlife observation.

Oliver James was born in Berkeley in 1991. He started watching birds in his backyard on Colusa Avenue at age five and never turned back. Since then, he has competed in national birding tournaments, worked as a birding tour guide, and joined ornithological research teams from Peru to Alaska. He graduated from Berkeley High School in 2009 and Wesleyan University in 2014, and in 2021 he received master's degrees from the Energy and Resources Group and the Goldman School of Public Policy at UC Berkeley. James is also the author of A Field Guide to the Birds of Wesleyan (Wesleyan University Press, 2014).