Following the Drum: Women at the Valley Forge Encampment (Hardcover) 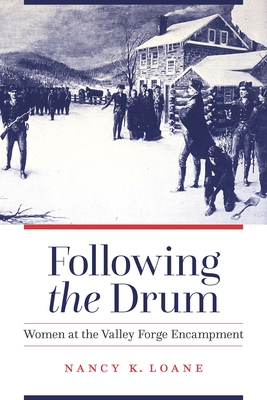 Following the Drum: Women at the Valley Forge Encampment (Hardcover)

By Nancy K. Loane
List Price: $36.95
Our Price: $33.26
(Save: $3.70 10%)
Often on our shelves, but if we're out, we can usually restock quickly
Friday, December 19, 1777, dawned cold and windy. Fourteen thousand Continental Army soldiers tramped from dawn to dusk along the rutted Pennsylvania roads from Gulph Mills to Valley Forge, the site of their winter encampment. The soldiers’ arrival was followed by the army’s wagons and hundreds of camp women. Following the Drum tells the story of the forgotten women who spent the winter of 1777–78 with the Continental Army at Valley Forge—from those on society’s lowest rungs to ladies on the upper echelons.

Impoverished and clinging to the edge of survival, many camp women were soldiers’ wives who worked as the army’s washers, nurses, cooks, and seamstresses. Other women at the encampment were of higher status: they traveled with George Washington’s entourage when the army headquarters shifted locations and served the general as valued cooks, laundresses, or housekeepers. There were also the ladies at Valley Forge who were not subject to the harsh conditions of camp life and came and went as they and their husbands, Washington’s generals and military advisers, saw fit. Nancy K. Loane uses sources such as issued military orders, pension depositions after the war, soldiers’ descriptions, and some of the women’s own diary entries and letters to bring these women to life.

Nancy K. Loane is a former seasonal ranger at Valley Forge National Park, a founding member of the American Revolution Round Table of Philadelphia, and an honorary lifetime member of the Society of the Descendants of Washington’s Army at Valley Forge. She lives in Valley Forge, Pennsylvania.
“[Loane] pulls together a rich array of sources to offer great detail about women’s lives, and she is diligent to tread carefully through recollections written down years after the fact. . . . Loane has found some great stories.”—Journal of American History

"Nancy K. Loane has cleared away the myths surrounding the women at the Valley Forge encampment, from Martha Washington to Mrs. Mary Geyer. Her careful documentation and relaxed writing style make this a not-to-be-missed book for historians and re-enactors."—Clarissa F. Dillon, Valley Forge historian

"In addition to the details . . . about the women at Valley Forge, Ms. Loane gives us many other fascinating general details about life in the camp among all of the social groups who were there."—Tredyffrin Easttown History Quarterly

“Dr. Nancy K. Loane’s fascination and passion regarding the women who supported General George Washington . . . during their encampment in Valley Forge, PA, shines through in her new book.”—Phoenix