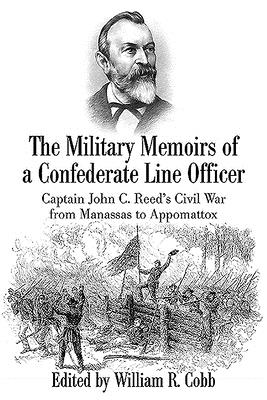 By William R. Cobb (Editor)
List Price: $29.95
Our Price: $26.96
(Save: $3.00 10%)
Not Yet Published
John C. Reed fought through the war in General Lee's Army of Northern Virginia as an officer in the 8th Georgia Infantry. A graduate of Princeton University and a classically educated aristocrat, he wrote home often and kept careful contemporaneous notes of his experiences in camp and on the battlefield. In 1888, Reed used these documents to produce a detailed memoir of his wartime experiences, but it was never published and because of an archival filing error after his death, was effectively lost for a century. The Military Memoirs of a Confederate Line Officer: Captain John C. Reed's Civil War from Manassas to Appomattox, edited by William R. Cobb, is published here in full for the first time.

Reed was the son of a famous minister, educator, planter, and slave owner, and the understudy of Georgia's preeminent pre-war lawyer. When his state left the Union, the 25-year-old joined a local volunteer unit as a 2nd lieutenant. The outfit mustered into Confederate service as Company I (The Stephens Light Guards) of the 8th Georgia Volunteer Infantry, rode the rails north to Virginia, and fought the entire war from First Manassas through Appomattox. As a line officer, Reed had a front row seat to the fighting. He was wounded at least twice (at Second Manassas and again at Gettysburg), promoted to captain during the Battle of the Wilderness on May 6, 1864, and led his company through the balance of the Overland Campaign and through the horrific siege of Petersburg all the way to the surrender on April 9, 1865.

The Military Memoirs of a Confederate Line Officer is a perceptive and articulate account filled with riveting recollections of some of the Civil War's most intense fighting. Reed doesn't shy away from providing his opinion on a variety of officers, decisions, and experiences, including the execution of deserters, premonitions of battlefield death, and what it was like to watch his friends and fellow soldiers die in battle.

Reed's outstanding memoir, judiciously edited and annotated by William R. Cobb, includes a special Foreword by Richard M. Allen, the compiler of a detailed roster of Georgia troops. The Military Memoirs of a Confederate Line Officer is a valuable resource certain to become a classic in the genre.