To the Last Extremity: The Battles for Charleston, 1776-1782 (Emerging Revolutionary War) (Paperback) 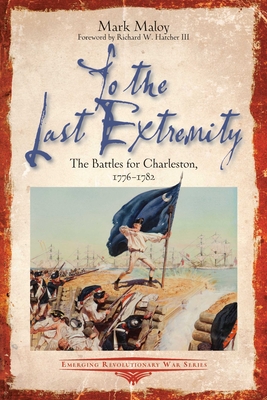 To the Last Extremity: The Battles for Charleston, 1776-1782 (Emerging Revolutionary War) (Paperback)

By Mark Maloy
List Price: $16.95
Our Price: $15.26
(Save: $1.70 10%)
Coming Soon - Available for Pre-Order Now
June 1776: Just a month before America declared its independence from Great Britain, a British fleet of warships and thousands of British soldiers appeared off the coast of Charleston, South Carolina. Following a brutal day-long battle, the most powerful navy in the world was bloodily repulsed by the Americans.

In the spring of 1779, a British force brazenly marched up to Charleston from Savannah and tested the city's defenses before falling back. Finally, in the spring of 1780, a massive British force returned to Charleston and laid siege to the city. This siege resulted in the worst defeat of the Revolutionary War for the Americans, as they lost the city and an entire army of nearly 6,000 men.

After being conquered by the British, the citizens and soldiers suffered more than two years of occupation and imprisonment. However, the siege of Charleston marked the beginning of the end of the Revolutionary War. The fall of Charleston initiated a series of events that ultimately resulted with the American victory at Yorktown and the successful independence of the United States.

Charleston, South Carolina is one of the most beautiful and historic cities in the United States. Numerous sites, battlefields, and buildings from the period of the Revolution still exist. In To the Last Extremity: The Battles for Charleston, historian Mark Maloy not only recounts the Revolutionary War history of Charleston, he takes you to the places where the history actually happened. He shows you where the outnumbered patriots beat back the most powerful navy in the world, where soldiers bravely defended the city in 1779 and 1780, and where thousands suffered under occupation. Through it all, brave patriots were willing to defend the city and their liberty "to the last extremity.