Pinball Wizards: Jackpots, Drains, and the Cult of the Silver Ball (Paperback) 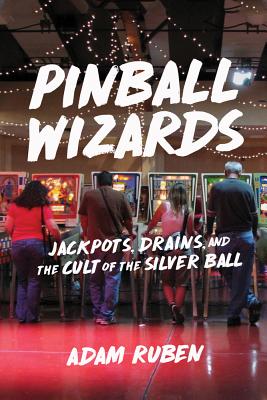 Pinball Wizards: Jackpots, Drains, and the Cult of the Silver Ball (Paperback)

By Adam Ruben
List Price: $16.99
Our Price: $15.29
(Save: $1.70 10%)
Backordered
Pinball’s history is America’s history, from gambling and war-themed machines to the arcade revolution and, ultimately, the decline of the need to leave your house. The strangest thing about pinball is that it persists, and not just as nostalgia. Pinball didn’t just stick around—it grew and continues to evolve with the times. Somehow, in today’s iPhone world, a three-hundred-pound monstrosity of wood and cables has survived to enjoy yet another renaissance.
Pinball is more to humor writer Adam Ruben than a fascinating book topic—it’s a lifelong obsession. Ruben played competitive pinball for years, rising as high as the 80th-ranked player in the world. Then he had children. Now, mired in 9,938th place—darn kids—Ruben tries to stage a comeback, visiting pinball museums, gaming conventions, pinball machine designers, and even pinball factories in his attempt to discover what makes the world’s best players, the real wizards, so good. Along the way, Ruben examines the bigger story of pinball's invention, ascent, near defeat, resurgence, near defeat again, and struggle to find its niche in modern society.

Adam Ruben is a humor writer, comedian, and molecular biologist helping to develop a vaccine for malaria. He is the author of Surviving Your Stupid, Stupid Decision to Go to Grad School as well as monthly online humor column “Experimental Error” in the journal Science. His writing has also appeared on CNN.com, NPR’s All Things Considered, and National Lampoon. He lives in Washington, DC.
“If Chuck Kloseterman and Aziz Ansari wrote a book about pinball together . . . then they still couldn’t top Pinball Wizards. Adam Ruben ricochets you around this strange, zany world and makes you love this timeless game as much as he does.” —Sam Kean, author of The Tale of the Dueling Neurosurgeons and The Disappearing Spoon

“Long before birds were angry or Mario was super, pinball lit up our lives and paved the way for our current cultural obsession. Ruben offers a fascinating and funny peek into our gaming past that will have you reaching for a roll of quarters." —David Nadelberg, creator, MORTIFIED

“Drawing from his considerable obsession with a game that has inspired generations of loyal players, Ruben plunges readers into this world of boardwalk arcades, bowling alleys, and pinball leagues with a fervor so contagious they may want to run out and join the “cult of the silver ball” themselves.”—Booklist