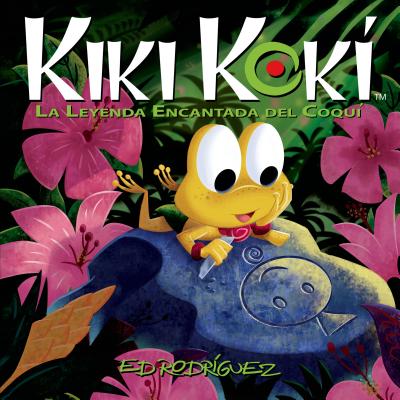 A magical Spanish-language tale, Kiki Koki tells the story of a little Taino Indian boy who is too lazy to help his tribe prepare for the Moon Festival. To punish Kiki Koki, the Moon Goddess turns him into a tree frog. To return to his human form, he must rescue his new frog friends from dangerous pirates, and, in the process, learns that friendship takes courage, dedication, and hard work. With its vibrant illustrations, heartwarming message, and adorable hero, children will love this fun tale.

Ed Rodriguez was born and raised in Brooklyn, New York. As a child he visited his grandparents in Puerto Rico and like most children was taken by the island's natural beauty and intrigued by the singing coquí frog. After a family trip with his own children, Ed was inspired to create Kiki Kokí. It is Ed's hope that children all over the world are introduced to the coquí frog through his book and learn to love and protect the coquí and other endangered species. Ed currently lives in California with his wife, Nancy, and their three children, where he works developing toys, art and family entertainment.
“In this Spanish-language picture book, Rodriguez presents one of the legends surrounding the unofficial symbol of Puerto Rico: the coquí. A Taíno boy, Kiki Kokí, does not like doing any work around his village. As a consequence, he is banned from attending the Moon Festival. A torrential rain sweeps the boy away and nearly drowns him until two frogs save his life. When discovering that the moon goddess has turned him into a little golden frog, Kokí is overcome with sadness. The lizard witch, Mona, tells him that he must remain in 'Frogville' (la villa de las ranas) and do good deeds for 30 days before he can ask the goddess to change him back into a boy. Rodriguez takes artistic license with his full-color, Disney-like cartoon illustrations and cherry-picks period dress and architecture from the entire span of post-conquest Puerto Rican history. The frogs are depicted wearing everything from top hats to guayabera shirts, both of which were nonexistent in the 1500s. In addition, town life features snow-cone pushcarts and a SpongeBob-inspired pineapple house. Aside from this revoltijo (medley) of disparate details, the story and illustrations are entertaining and even introduce a motley gang of pirates who want to frognap and enslave all of Kokí's amphibian friends. Kokí saves the day and learns a lesson about the importance of cooperation. VERDICT: Young readers will enjoy this Taíno Indian origin myth.” —School Library Journal