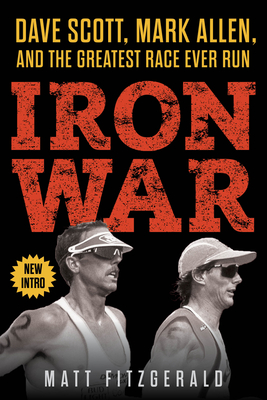 By Matt Fitzgerald
List Price: $18.95
Our Price: $17.06
(Save: $1.90 10%)
Often on our shelves, but if we're out, we can usually restock quickly
The classic account of an unforgettable endurance test, now updated with a new introduction

The 1989 Ironman World Championship was the greatest race ever in endurance sports. In a spectacular duel that became known as the Iron War, the world's two strongest athletes raced side by side at world-record pace for a grueling 139 miles.

Driven by one of the fiercest rivalries in triathlon, Dave Scott and Mark Allen raced shoulder to shoulder through Ironman's 2.4-mile swim, 112-mile bike race, and 26.2-mile marathon. After 8 punishing hours, both men would demolish the previous record--and cross the finish line a mere 58 seconds apart.

In Iron War, sports journalist Matt Fitzgerald writes a riveting epic about how Allen and Scott drove themselves and each other through the most awe-inspiring race in sports history. Iron War goes beyond the pulse-pounding race story to offer a fascinating exploration of the lives of the world's two toughest men and their unquenchable desire to succeed.

Weaving an examination of mental resolve into a gripping tale of athletic adventure, Iron War is a soaring narrative of two champions and the paths that led to their stunning final showdown.
Matt Fitzgerald is an award-winning endurance sports journalist and bestselling author of more than 20 books on running, triathlon, fitness, nutrition, and weight loss, including Brain Training for Runners and Racing Weight. His byline appears regularly in national publications including Men's Journal, Outside, and Women's Running. An experienced running and triathlon coach and certified sports nutritionist, Matt serves as a Training Intelligence Specialist for PEAR Sports and as a featured coach on active.com.