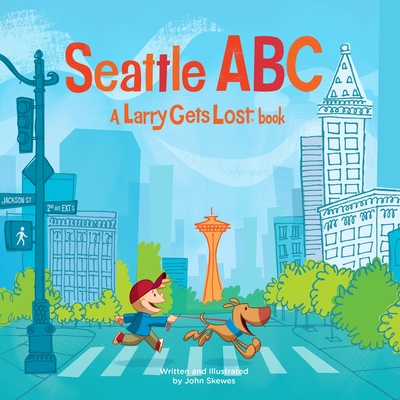 By John Skewes
List Price: $14.99
Our Price: $13.49
(Save: $1.50 10%)
Featuring new artwork and a new trim size perfect for gift giving, this companion to the best-selling Larry Gets Lost in Seattle follows Larry and his owner, Pete, on an alphabetical journey throughout Seattle.

A playful, colorful alphabet book based on the popular Larry Gets Lost in Seattle children’s book. Larry the pup and his best friend, Pete, discover Seattle from A (Seattle Aquarium) to Z (Woodland Park Zoo), and everything in between. H is for houseboats and hydroplanes. O is for orcas. Kids will have fun discovering their city as they learn their ABCs.
JOHN SKEWES began work as a product designer and character artist for Disney Consumer Products before leaving to start his own company, Retrodyne Industries, in 2001. His clients include Warner Bros., Hanna-Barbera, Fox, Pixar, and Simon & Schuster. As the creator and illustrator of the award-winning Larry Gets Lost children’s book series, John has followed Larry from the southern tip of Texas to tiny Nome, AK, and has been lost several times himself. He has illustrated over 20 children’s books, including the Elliott the Otter and A Ticket to the Pennant.
Whether they’re riding the monorail, cruising along Alaskan Way or floating by houseboats and hydroplanes, Larry and Pete are teaching our Littles there are letters to be found everywhere, and of course, U is indeed for umbrella. Larry Gets Lost creator and illustrator John Skewes and author Robert Schwartz are both Northwest residents, which is obvious in this familiar and fun look at all our glorious city has to offer.
—Red Tricycle

One of the best ABC books about Seattle around... [Seattle ABC] is short, sweet and pure eye candy. The best kind of treat of all.
—Seattle magazine

Take a trip around Seattle with Pete and his dog Larry. When Larry gets lost, he runs through Pike Place Market and the Seattle Center, past the Fremont Troll, leaps onto a tugboat, and finds Pete, just in time to go through the Ballard Locks.
—Travel for Kids Seattle