When Winter Comes: Discovering Wildlife in Our Snowy Woods (When Seasons Come) (Hardcover) 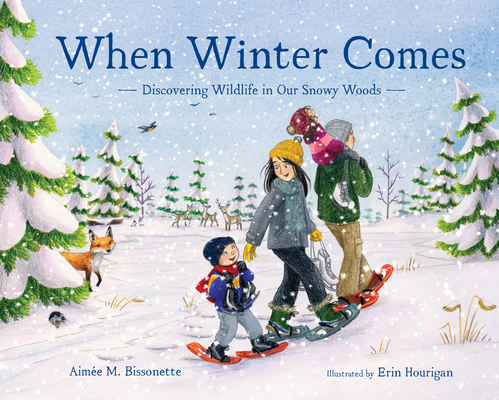 When Winter Comes: Discovering Wildlife in Our Snowy Woods (When Seasons Come) (Hardcover)

Though a forest may be blanketed in snow or a lake frozen over, families who enjoy the outdoors in winter, happily bundled up to play in the energizing weather, know that wildlife is still teeming there.

When winter comes,
and deep snow blankets the woods,
and ice forms cold and smooth on the lakes,
thick enough for us to skate on,
some people think our woods are empty.
But we know better.

The fallen log that is used to hide behind in a snowball fight is a shelter for tree frogs, caterpillars, ladybugs, and slugs. The drifts of fallen snow that families snowshoe across have winding tunnels made by meadow mice in search of seeds and bark. The towering trees families ski among shield birds from winter winds.

ERIN HOURIGAN is an illustrator and author in Portland, Oregon. She grew up in Southern California, and studied illustration at Cal State Fullerton before moving to Oregon, where she learned to trade the waves for pine trees and rivers. She draws much of her inspiration from the world around her and loves spending time outdoors, whether it's on a hike or just playing with her dog, Scout.
"Through intriguing cutaway scenes, many illustrations also reveal the animals scurrying about or resting underground and beneath the snow and ice. This lively picture book offers a fresh perspective on the animals-in-winter theme."--Booklist


"Hourigan’s joyful illustrations will encourage children to take a closer look at the world around them."--School Library Journal