History of Romania: A Captivating Guide to Romanian History, Including Events Such as the First Roman-Dacian War, Raids of Vlad III Dracul (Paperback) 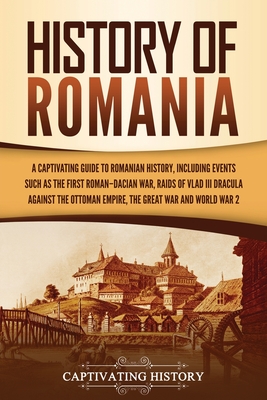 History of Romania: A Captivating Guide to Romanian History, Including Events Such as the First Roman-Dacian War, Raids of Vlad III Dracul (Paperback)

Do you want to discover more about the country that inspired the story of Dracula? Then dive into the captivating history of Romania

Romania was internationally recognized in 1878, but its history is much older. To understand the people who inhabit this country, one must go back thousands of years and meet the first king who united the local tribes, Burebista. He and his successor, Decebal, warred against Roman legions, and although they displayed extraordinary bravery and military prowess, it wasn't enough to preserve their independence. In this book, you will discover how Romania developed from a distant Roman province on the fringes of the Roman Empire to a modern state in eastern Europe, one ready to adopt Western values.

Romania lies on Europe's eastern border, and as such, it is often neglected in history. Although it is a culturally very rich country, the world displayed little interest in its promotion. By reading this captivating history of Romania, you will learn about the turbulent past of the region, the many wars it fought, and the people who led them. You will also learn the truth behind the character of Vlad the Impaler and decide for yourself if he was a ruthless, bloodthirsty ruler or a politician, tactician, and national hero.

Here is a tiny fraction of what you will discover in this book:

So if you want to learn more about the history of Romania, scroll up and click the "add to cart" button