Figure It Out: My Thirty-Two-Year Journey While Revolutionizing Pro Football's Special Teams (Paperback) 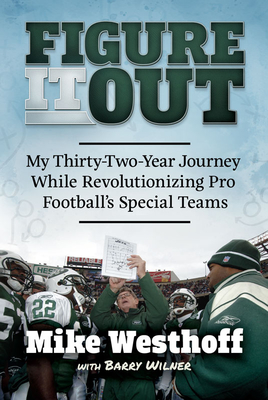 Figure It Out: My Thirty-Two-Year Journey While Revolutionizing Pro Football's Special Teams (Paperback)

By Mike Westhoff, Barry Wilner
List Price: $19.95
Our Price: $17.96
(Save: $2.00 10%)
Often on our shelves, but if we're out, we can usually restock quickly
We called Mike Westhoff the mad scientist. He changed the game. -- Roger Goodell, NFL commissioner

Sharp-witted, creative, and intensely focused, Westhoff spent thirty-two years working alongside and learning from some of the legends of the sport--including Don Shula, Dan Marino, Woody Hayes, and Al Davis--while revolutionizing the most misunderstood phase of the game.

Over the course of 657 games, primarily with the New York Jets and the Miami Dolphins, Westhoff was a relentless innovator--constantly figuring out new ways to help the individual skills of hundreds of players surface and develop. All the while, he reinforced the essential qualities of diligence, creativity, and teamwork in a sport built on those traits.

Interviews with dozens of his contemporaries and former players such as Sean Payton, Taysom Hill, and Zach Thomas provide a rare glimpse of NFL life beyond the field--inside the offices, meeting rooms, and locker rooms with one of the game's most unforgettable personalities.

But his story isn't just about football. Westhoff also shares intimate details of his multiple battles with cancer and the life lessons learned through the fights.

In Figure It Out, Westhoff presents his one-of-a-kind experiences and unfiltered views in his trademark style--a refreshing blend of honest (sometimes brutally so), funny, and poignant. His deep insights into the workings of special teams--illustrated by 27 detailed original diagrams--and timely commentary on the current state of pro football reveal a critical side of the sport that very few truly understand.