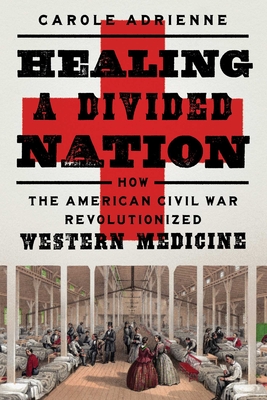 By Carole Adrienne
List Price: $28.95
Our Price: $26.06
(Save: $2.90 10%)
Often on our shelves, but if we're out, we can usually restock quickly
A profound and insightful investigation into how the American Civil War transformed modern medicine.

At the start of the Civil War, the medical field in America was rudimentary, unsanitary, and woefully underprepared to address what would become the bloodiest conflict on U.S. soil. However, in this historic moment of pivotal social and political change, medicine was also fast evolving to meet the needs of the time. Unprecedented strides were made in the science of medicine, and as women and African Americans were admitted into the field for the first time.

The Civil War marked a revolution in healthcare as a whole, laying the foundations for the system we know today. In Healing a Divided Nation, Carole Adrienne will track this remarkable and bloody transformation in its cultural and historical context, illustrating how the advancements made in these four years reverberated throughout the western world for years to come.

Analyzing the changes in education, society, humanitarianism, and technology in addition to the scientific strides of the period lends Healing a Divided Nation a uniquely wide lens to the topic, expanding the legacy of the developments made. The echoes of Civil War medicine are in every ambulance, every vaccination, every woman who holds a paying job, and in every Black university graduate. Those echoes are in every response of the International and American Red Cross and they are in the recommended international protocol for the treatment of prisoners of war and wounded soldiers.

Beginning with the state of medicine at the outset of the war, when doctors did not even know about sterilizing their tools, Adrienne illuminates the transformation in American healthcare through primary source texts that document the lives and achievements of the individuals who pioneered these changes in medicine and society. The story that ensues is one of American innovation and resilience in the face of unparalleled violence, adding a new dimension to the legacy of the Civil War.
Carole Adrienne received her B.F.A. from Moore College of Art and Design in Philadelphia.  She has organized an archive for Old St. Joseph’s National Shrine, twice chaired “Archives Week” in Philadelphia, and has served on advisory panels for the Philadelphia Archdiocesan Historical Research Center, The Mutter Museum’s “Civil War Medicine” exhibit and its “Spit Spreads Death: The 1918 Flu Epidemic” exhibit.  She is working on a documentary film series on Civil War medicine and lives in Philadelphia, PA. This is her first book.
Praise for Healing a Divided Nation:

"We see doctors, nurses, volunteers, inventors, and others—black and white, men and women—whose collective efforts healed sick and wounded spirits and bodies of hundreds of thousands of people. The book’s strength lies in weaving personal stories of the people who displayed the best angels of our nature. The effect is inspirational."  —Robert D. Hicks, PhD, Senior Consulting Scholar, director of the F.C. Wood Institute for the History of Medicine at The College of Physicians of Philadelphia and William Maul Measey Chairholder

"In the mid-nineteenth century, every aspect of our country was being transformed. In this compendium of the luminaries of the age, Carole Adrienne sympathetically details how the horrors of the Civil War shone a light upon our medical and scientific ignorance, fostering a medical revolution in the West. Alongside this technical metamorphosis, a stunning cultural shift occurred, wherein women and Black Americans achieved new prominence that would have been impossible without war. Understand the characters in this work and you’ll see America in a new light!” —David Schneider, author of The Invention of Surgery

"A comprehensive and captivating account of the seismic transformation of Western medicine caused by the American Civil War. The countless medical breakthroughs resulting from the war—including improved hospitals, advanced surgical techniques, and new opportunities for female and African American health professionals—touched every facet of American society. In telling this epic story, Carole Adrienne presents fascinating and gripping details on every page." —John Reeves, author of A Fire in the Wilderness: The First Battle Between Ulysses S. Grant and Ro

"Healing a Divided Nation is a well-written, comprehensive look at medicine during the Civil War that brought American medicine 'out of the medical Middle Ages.' This book tells the stories of the innovations, personnel, and the legacy that is Civil War Medicine." —Peter J. D’Onofrio, Ph. D. President Emeritus Society of Civil War Surgeons

"The phrase “war is hell” has become such a trope that we sometimes forget how literally true it is. Carole Adrienne won’t let us forget it. While telling the fascinating stories of heroic physicians and nurses innovating on Civil War battlefields or describing how that same war brought about long-overdue social change, she reminds us of the brutal irony that it can take the hell of war for humans to make the kinds of progress that “should” be achieved without violence and, certainly without death." —David Blistein, Author of Opium How an Ancient Flower Shaped and Poisoned Our World

"Documentary filmmaker Adrienne’s excellent history distinguishes itself with short biographies of unfamiliar or unsung figures of Civil War–era medicine. Adrienne’s strength is in immersing readers in unimaginable situations...Overall, this is a good introduction to the subject and an enjoyable read. A good addition for those interested in the Civil War, biographies about women, and African American history."
— Library Journal