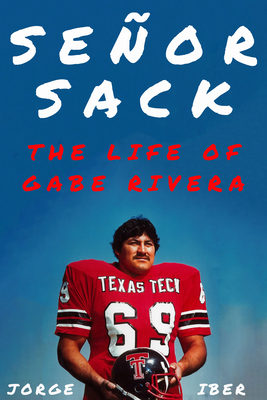 By Jorge Iber
List Price: $27.95
Our Price: $25.16
(Save: $2.80 10%)
Often on our shelves, but if we're out, we can usually restock quickly
Gabriel "Gabe" Rivera was one of the greatest players in the history of Texas Tech football. He earned All American status, was enshrined into the College Football Hall of Fame, and saw his name elevated to the Texas Tech Ring of Honor. After his college career, Rivera became a first-round selection of the Pittsburgh Steelers in 1983, but his career would be tragically cut short by an accident during his rookie year that left him paralyzed from the waist down.

Sports historian Jorge Iber's newest book chronicles this Mexican American athlete's rise to prominence and later life. Beginning with the Rivera family in Crystal City, Texas, a hotbed of Chicano activism in the late 1960s, Se or Sack seeks to understand how athletic success impacted the Rivera family's most famous son on his route to stardom. Football provided this family with opportunities that were not often available to other Mexican Americans during the 1940s and 1950s.

While Rivera's injury seriously derailed his life, Se or Sack also chronicles his struggle to regain a sense of purpose. With great effort and despite adversity, over the final two decades of his life, Rivera found meaning in helping minority youths in his community of San Antonio, serving as an example of what can be accomplished even under incredibly trying circumstances. Ultimately, the true legacy of Gabe Rivera is not just on the football field, but also in the lives he touched with his volunteer work. One of the most storied Red Raiders and a legend of Texas football, Gabe Rivera powered through many obstacles to make way for future generations of Latinos in American sports.