Giants Among Men: How Robustelli, Huff, Gifford, and the Giants Made New York a Football Town and Changed the NFL (Paperback) 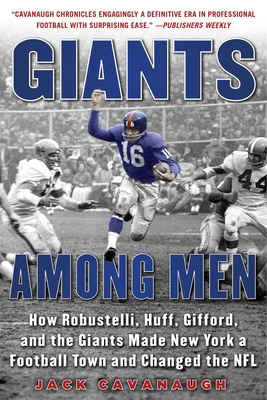 Giants Among Men: How Robustelli, Huff, Gifford, and the Giants Made New York a Football Town and Changed the NFL (Paperback)


Unfortunately, this book is not available to order through us. Please try Powells.com or Biblio.com.
From the mid-1950s to the early 1960s, when basketball’s Boston Celtics were piecing together a run for the ages, when Montreal’s Canadiens were in the midst of notching a record-setting five streaight Stanley Cups, and when the New York Yankees were the once-and-future kings of the diamond, one team boosted the NFL to national prominence as none other: the New York Giants.

In Giants Among Men, Jack Cavanaugh, the acclaimed author of Tunney, transports us to the NFL’s golden age to introduce the close-knit and diverse group that won the heart of a city, helped spread the gospel of pro football across the nation, and recast the NFL as a media colossus.

Central to Cavanaugh’s narrative, and emblematic of the Giants’ bond with their followers, was a hard-nosed future Hall of Fame defensive end named Andy Robustelli, who anchored a Giants defense unit so ferocious that they were the first team to inspire crowds to chant “Dee-fense!” But while Robustelli and the Giants were a hit on the gridiron, playing in six NFL Championship Games in eight seasons between 1956 and 1963, the most remarkable aspect of this team was perhaps its relationship with the fans, who were equally at east hobnobbing with Jackie Gleason and Frank Sinatra as they were rubbing elbows with working-class rooters on the IRT en route to Sunday games in the Bronx. But the Giants of this era didn’t merely affect the fans’ relationship to the game; they changed the game itself. The team launched the NFL careers of future head-coaching geniuses Tom Landry and Vince Lombardi, as well as those of future Hall of Famers including Frank Gifford, Sam Huff, Emlen Tunnell, Roosevelt Brown, and Y. A. Tittle, along with stars like Charlie Conerly, Rosey Grier, and Pat Summerall.

Filled with historical and cultural insight and vivid portraits of large-than-life characters and indispensable everymen, Giants Among Men transcends nostalgia and sports trivia to faithfully depict a watershed era for both football and the American nation.
Jack Cavanaugh is a veteran sportswriter whose work has appeared most notably on the sports pages of the New York Times, for which he has covered hundreds of assignments. He is the author of six books, including Tunney (2006), which was nominated for the Pulitzer Prize, The Gipper (2010), and Season of ’42. He has also written for Sports Illustrated, Reader’s Digest, Golf and Tennis magazines, and a number of other national publications. Cavanaugh also was a reporter for ABC and CBS News, and has been an adjunct professor at Fairfield and Quinnipiac universities, and the Columbia Graduate School of Journalism.