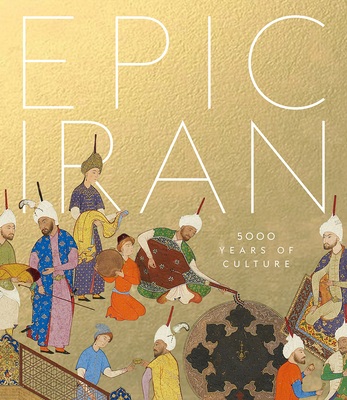 By John Curtis, Ina Sarikhani Sandmann, Tim Stanley
List Price: $55.00
Our Price: $49.50
(Save: $5.50 10%)
A stunning introduction to the material culture of some of the great civilizations of Asia

Iran was the home of some of the greatest civilizations of both the ancient and medieval worlds, but these achievements remain poorly known and largely misunderstood outside the country. Epic Iran tells the story of Iran from pre-Islamic through modern times and provides an opportunity to see pieces from key museum and private collections. This book combines the ancient and Islamic periods and continues the narrative into the contemporary world. It shows how civilized life emerged in Iran around 3,200 BC and how a distinctive Iranian identity formed 2,500 years ago has survived until today, expressed in the Persian language and in religious affiliations.
Lavishly illustrated, some 250 images showcase pieces including goldwork, ceramics, glass, illustrated manuscripts, textiles, carpets, oil paintings, drawings, and photographs. Alongside the historical sweep are examples from contemporary artists and makers, demonstrating the rich antecedents still influencing some modern-day practitioners.
John Curtis is Academic Director of the Iran Heritage Foundation and former Keeper of the Middle East Department at the British Museum
Ina Sarikhani Sandmann is co-founder of the Sarikhani Collection
Tim Stanley is senior curator in the Asian Department at the V&A